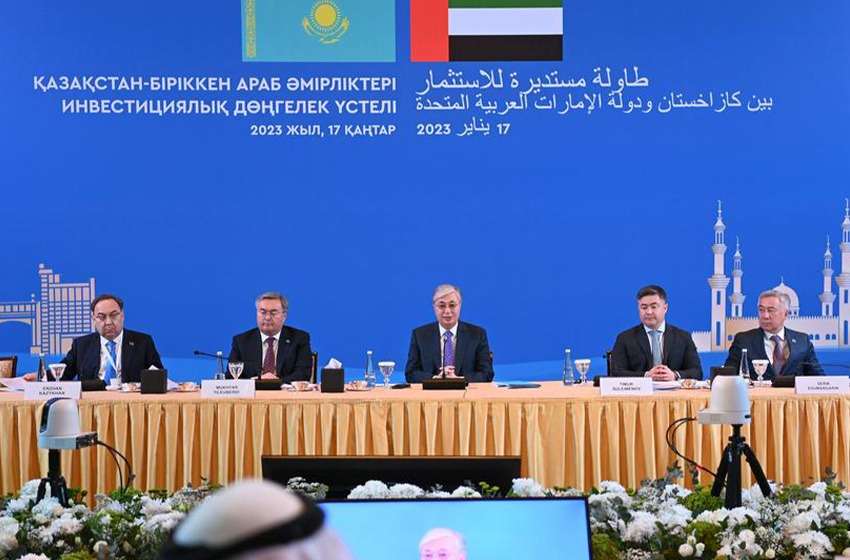 Astana-Abu Dhabi-Kazinform: Kazakh President Kassym-Jomart Tokayev participated in the investment roundtable between Kazakhstan and the UAE as part of his official visit to the United Arab Emirates, while the two countries signed 11 commercial and real estate documents worth more than $2.5 billion.

«Kazakh-UAE partnership is based on two pillars: huge economic potential and business interests on the one hand, and mutual respect and common values on the other hand. Our countries enjoy over 30 years of exemplary relations. The UAE is our key regional trade and economic partner, investing around three billion dollars in Kazakhstan, while our country has invested over one billion dollars. By the end of 2022, the trade turnover between our countries stood at 600 million dollars. It’s a great achievement,» said the Kazakh President.
One of the key agreements is a declaration between the Governments of Kazakhstan and the UAE, under which the parties will cooperate in the implementation of strategic investment projects.
Two documents were also signed with Abu Dhabi Ports – an agreement on the implementation of projects in the field of maritime infrastructure with the Ministry of Industry and Infrastructure of the Republic of Kazakhstan and an agreement on strategic partnership with KazMunayGas.
KIDF and the Ministry of Energy of the Republic of Kazakhstan signed an Agreement «on principles» for the implementation of projects in the field of alternative energy with the company Masdar.
KAZAKH INVEST signed agreements with Al Badie Group on cooperation in the implementation of investment projects, with Danube Group – on cooperation in the implementation of projects in the field of production of construction materials, as well as with Alserkal Group – on cooperation within the framework of the project of recycling of organic waste.
Semurg Invest and Abu Dhabi Ports signed a Memorandum of Understanding on the development of the project for the construction and operation of Multifunctional marine terminal «Sarzha» in the port of Kuryk, Aktau.
QazaqGaz signed Memorandums of Understanding on cooperation with Emirati companies Dragon Oil and Petromal on the implementation of projects in the oil and gas sector. The documents are aimed at increasing cooperation in the development of gas fields, geological study of subsurface resources and development of gas processing.
A document on joint financing of venture projects was signed by the companies Astana Hub and Presight (Group 42).
It is worth noting that the investment roundtable with the participation of the Head of State was organized by the Ministry of Foreign Affairs of the Republic of Kazakhstan, the Embassy of the Republic of Kazakhstan in the UAE, and «NC»KAZAKH INVEST«JSC.