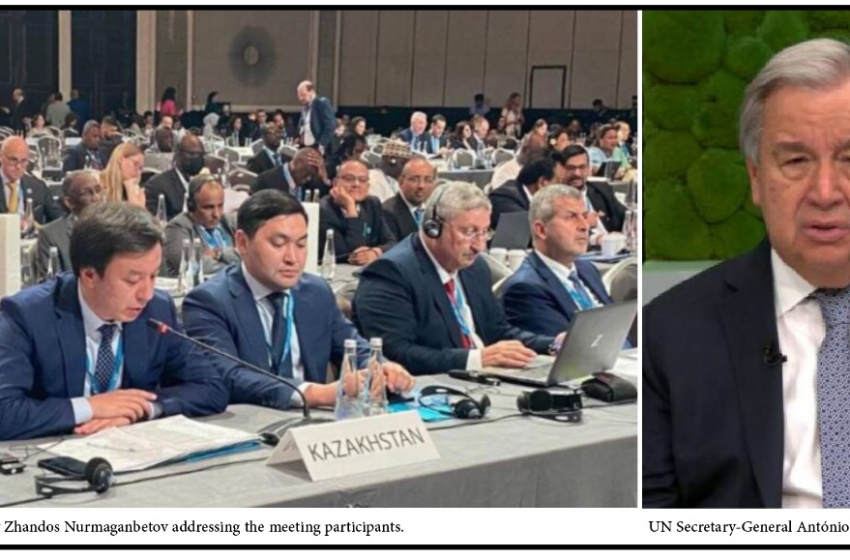 ASTANA – Kazakhstan’s Vice Minister of Energy Zhandos Nurmaganbetov reiterated the country’s commitment to reaching carbon neutrality by 2060, as the Kazakh delegation took part in the 13th session of the International Renewable Energy Agency (IRENA) Assembly in Abu Dhabi on Jan. 14-15, reported the ministry’s press service.
Addressing the meeting participants, Kazakhstan’s Vice Minister of Energy Zhandos Nurmaganbetov emphasized the country’s adherence to the sustainable development goals and its obligations under the Paris Agreement. According to him, Kazakhstan, alongside the international community, pays close attention to developing renewable energy sources.
During their meeting with the IRENA top management, the Kazakh delegation explored the possibility of organizing a seminar on Central Asia in Kazakhstan, dedicated to the joint efforts of neighbouring countries to accelerate the energy transition and use of the region’s vast renewable resources.

Organized by the IRENA, a leading global intergovernmental agency for energy transition, the event was attended by delegates from 168 countries and chaired by IRENA Director-General Francesco La Camera.
In a video address to the participants, United Nations (UN) Secretary-General António Guterres said that renewable energy is the only credible path forward if the world is to avert a climate catastrophe, outlining a five-point plan for a just transition.
“Only renewables can safeguard our future, close the energy access gap, stabilize prices and ensure energy security,” he said.
The world still relies heavily on fossil fuels, and the goal of limiting global temperature rise to 1.5 degrees Celsius is fast slipping out of reach, Guterres warned.
“Under current policies, we are headed for 2.8 degrees of global warming by the end of the century. The consequences will be devastating. Several parts of our planet will be uninhabitable. And for many, this is a death sentence,” he said.
UN Secretary-General António Guterres addressing the IRENA Assembly on Jan. 14. Screenshot from video address
Renewable energy sources currently account for nearly 30 percent of global electricity. Guterres said this must double to over 60 percent by 2030 and 90 percent by mid-century.
Guterres called for removing intellectual property barriers so that key renewable technologies, including energy storage, are treated as global public goods.
The UN Secretary-General said that countries also must diversify and increase access to supply chains for raw materials and components for renewable technologies without degrading the environment.
“This can help create millions of green jobs, especially for women and youth in the developing world,” said Guterres.
The UN chief urged decision-makers to cut red tape, fast-track approvals for sustainable projects worldwide, and modernize power grids. He stressed the need to shift from fossil fuels to clean and affordable energy, adding that “we must support vulnerable groups affected by this transition.”
According to Guterres, public and private investments in renewables should triple to at least $4 trillion a year.
Noting that most investments in renewables are in developed countries, Guterres urged countries to work together to reduce the capital cost for renewables and ensure that financing flows to those who need it most.