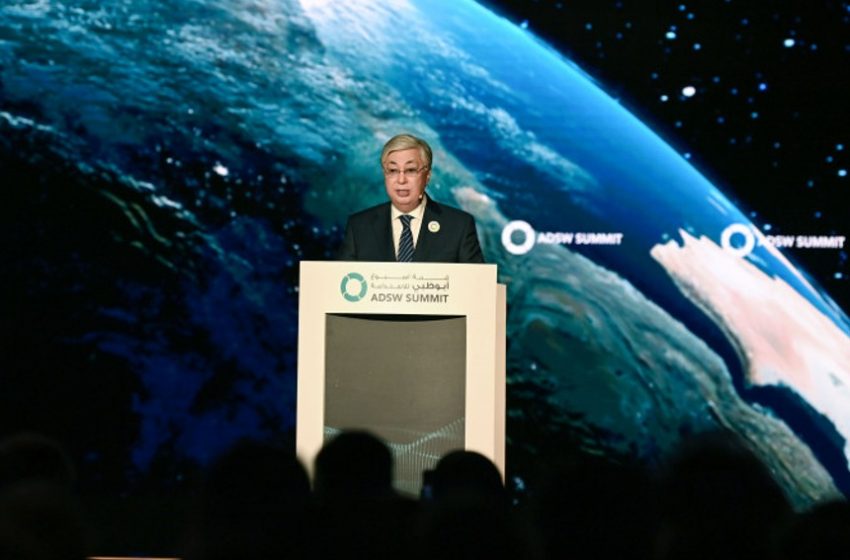 The President called it a common task to address the issues of sustainable development for a cleaner and greener future.
According to him, given the growing geopolitical instability and lacking energy security the topic of climate change took a backseat.
«The rising global temperature could lead to a significant reduction in the yield of the most important crops, responsible for 66% of the calories consumed. There is a serious risk of fresh water shortages. According to the UN report, by 2025 fresh water shortages could affect over five billion people, eventually undermining the global food as well as energy, urban, and environmental systems. All this requires immediate and effective action, and not only political. To save the plant unprecedented investments are needed,» said Tokayev.

In the Kazakh President’s words, measures to fight climate change should not come at the expense of development and modernization.

«Kazakhstan made long-term commitments to achieve carbon neutrality. And, in fact, our country was among the first to ratify the Paris Agreement. Next, we established an ambitious but a solid policy aimed at diversifying the economy and promote renewable energy sources and sustainable technologies,» said the President.

Tokayev pointed out that Kazakhstan is the first CA country to adopt a long-term zero carbon strategy, providing for best ways to reach indicators in fighting climate change at the national level.
«The national system of quotas and trade in quotas for greenhouse gas emissions proved its efficiency as a mechanism to stimulate reduction of emissions and develop energy efficiency technology. Our common goal is bridging the gap between national and European emission trading systems. All these measures will ensure the fulfillment of the commitments of the Paris Agreement by 2030,» said the Kazakh leader.
During the meeting, the Kazakh Head of State shared the prospects for the development of renewable and alternative energy in Kazakhstan.
«In general, according to our plans, Kazakhstan will deploy 6.5GW of renewable energy by 2035. Another promising area is green hydrogen,» said the Kazakh President.

He went on to point the importance of using the potential of atomic energy as one of the key factors in reducing greenhouse gas emissions.
«Our country ranks first in the world in uranium production. We produce nuclear fuel components and are capable to further promote safe use of atomic energy. We think that this is a very promising sphere for trading and investments regionally and globally,» said Tokayev.

Kazakhstan, which joined the Declaration on Forests and Land Use (GDFLU), launched the large-scale project to plant two billion trees by 2025. Last year, the country planted 282 million trees, and plans to plant 410 million more trees this year.
According to the Head of State, Kazakhstan, the world’s 7th grain producer, aims to use its agricultural potential to protect global food safety.
In conclusion, Tokayev urged all participants of the ADSW Summit to actively carry out green projects, mobilize ESG investments, and join efforts to achieve the SDGs.