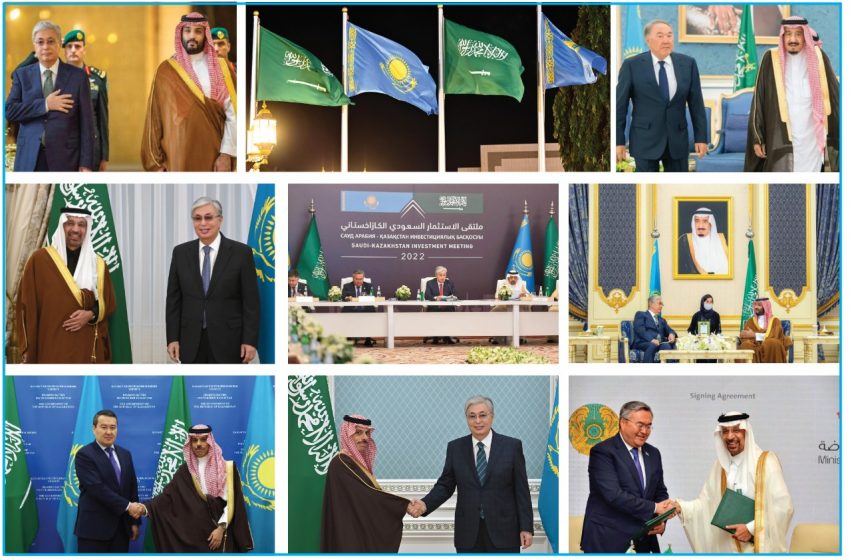 Saudi Arabia was among the first Arab and Muslim countries which recognized Kazakhstan’s Independence on 30 December 1991.
Diplomatic relations between Kazakhstan and Saudi Arabia were established on 30 April 1994. The Embassy of Kazakhstan in Riyadh was opened on 13 December 1995, and since 28 December 2007 the Consulate of Kazakhstan has been functioning in Jeddah, which received the status of Consulate General from 5 August 2019.
H.E. Mr. Berik Aryn has been the Ambassador Extraordinary and Plenipotentiary of the Republic of Kazakhstan to the Kingdom of Saudi Arabia since March 2019.
H.E. Mr. Talgat Shaldanbay has been the Consul General of the Republic of Kazakhstan in Jeddah since July 2017.
The Embassy of Saudi Arabia in Kazakhstan has been functioning since March 1997. Since February 2020 – the Ambassador Extraordinary and Plenipotentiary of the Kingdom of Saudi Arabia to the Republic of Kazakhstan is H.E. Mr. Abdul Aziz bin Abdullah Al-Daoud.
In September 1994, the first official visit of the President of the RK Nursultan Nazarbayev to the Kingdom took place, which laid the foundation for mutually beneficial cooperation between the two countries and defined the prospects for the development of multifaceted relations. Following the negotiations, the General Agreement on Cooperation in trade, economic, investment, technical and cultural areas, as well as in the field of sports and youth affairs was signed.
Further strengthening of friendly relations was promoted by the visit to Kazakhstan in 2000 of the Second Deputy Prime Minister, Minister of Defense and Aviation, Inspector General of the Kingdom of Saudi Arabia Prince Sultan bin Abdul Aziz.
In March 2004 the second official visit of the President of RK N.A.Nazarbayev to Saudi Arabia took place. During the visit, Crown Prince Abdullah bin Abdul Aziz (King of Saudi Arabia in the period 2005 – 2015) was awarded the Order “Dostyk” 1st degree for his contribution to the development of comprehensive ties between the two countries. In his turn, Crown Prince Abdallah presented the President of Kazakhstan with the highest award of the Kingdom – the Order “Great Badr”.
On April 14, 2015, Kazakh President Nursultan Nazarbayev met with King Salman bin Abdul Aziz on the margins of the XIII OIC Summit in Istanbul. In the course of the meeting, the leaders of the two countries discussed the state and prospects of bilateral cooperation in trade and economic, investment, scientific-technical and cultural-humanitarian spheres.
On September 4-5, 2016 in Beijing, President Nazarbayev met with Deputy Prime Minister of KSA, Crown Prince Mohammed bin Salman on the fields of the G20.
October 24-25, 2016 the third official visit of President Nursultan Nazarbayev to Saudi Arabia, during which he held talks with King Salman. The leaders of the two countries discussed the state and prospects of bilateral cooperation in trade and economic, political, cultural and humanitarian spheres. A number of important agreements on legal assistance, nuclear energy and agriculture were signed during the visit.
On May 21, 2017 in Riyadh President of Kazakhstan Nursultan Nazarbayev took part in the summit “USA – Arab and Islamic world”, in the framework of which he held a number of meetings with heads of states and delegations.
On March 30, 2019, King Salman bin Abdul Aziz held a telephone conversation with President Kassym-Jomart Tokayev. The Custodian of the Two Holy Mosques congratulated the Head of Kazakhstan on his assumption of office and wished him success in his highest state post. In his turn, K.Tokayev noted the huge contribution of the First President Nursultan Nazabayev to the development of cooperation with Saudi Arabia and assured that he would continue the course of strengthening mutually beneficial relations.
Over the past period, the two countries have carried out 85 mutual visits. Among them 28 visits at the ministerial level, 16 at the level of deputy ministers, 10 at the parliamentary line and 31 at other levels.

In the economic matter, the two sides praised the development of economic and investment relations between the two countries, and agreed to work to strengthen the economic and trade partnership between them by achieving integration between the available opportunities, and exploring and developing investment fields in light of the Kingdom’s Vision 2030 and Kazakhstan 2050. The two sides also noted the existing cooperation. Through the Saudi-Kazakh joint committee.