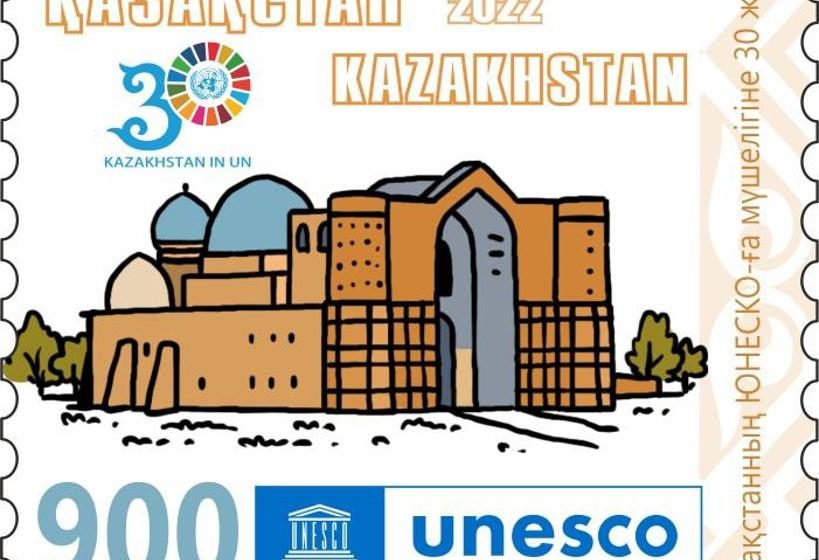 The postage stamp with a price of 900 tenge per copy depicts a UNESCO World Heritage Site – the Mausoleum of Khoja Ahmed Yasawi, which was included by Kazakhstan in 2003. The stamp was designed by French illustrator Nicolas Journoud and will be issued in a circulation of 10,000 pieces.

It is to be recalled, that the Republic of Kazakhstan was acceded as a member of UNESCO on May 22, 1992, at the plenary session of the 46th session of the UN General Assembly. Cooperation with the Organization is coordinated by the National Commission of the Republic of Kazakhstan for UNESCO and ICESCO. Kazakhstan is a party to 15 international conventions under the auspices of UNESCO. The Memory of the World Register includes 3 Kazakhstan nominations (collection of manuscripts of Khoja Ahmed Yasawi and his students, audiovisual documents of the international antinuclear movement “Nevada-Semipalatinsk”, as well as the “Aral Sea Archival Funds”), World Heritage List includes 5 sites (Mausoleum of Khoja Ahmed Yasawi (2003), Petroglyphs of the archaeological landscape of Tanbaly (2004), Sary-Arka – steppes and lakes of Northern Kazakhstan (2008), Silk Road: network of routes of the Chang’an-Tien-Shan corridor (2014), and also Western Tien Shan (2016), Representative List of the Intangible Cultural Heritage includes 13 elements (national nominations “Orteke”, “The art of performing dombra”, “Kazakh kuresi”, “Playing asyks”, “Traditional festive spring rituals of Kazakh horse breeders”, joint nominations with Kyrgyzstan “Yurt making skills” and “Aitys Aitysh, the art of improvisation”, as well as multinational nominations “Nauryz” (12 countries), “Falconry” (24 countries), “Thin Turkic bread” (5 countries), “Heritage of Korkyt” (3 countries), “Togyzkumalak” (3 countries), “Anecdotes of Kozhanasyr” (7 countries), Network of Biosphere reserves includes 15 sites, UNESCO anniversaries include 27 Kazakhstan’s proposals. There are 5 UNESCO faculties in Kazakhstan’s universities, 31 schools have UNESCO certificates and 182 country clubs included in the Kazakhstan Federation on UNESCO Clubs.