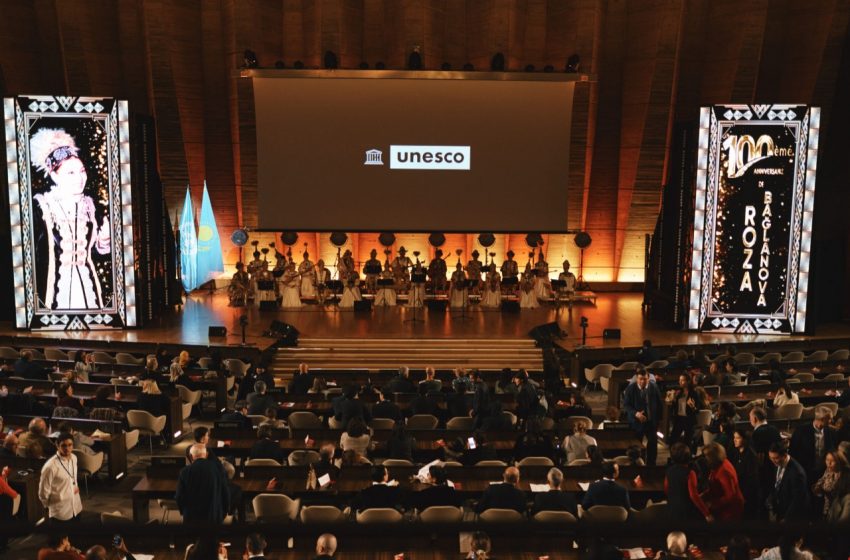 ASTANA – This year has provided a solid impetus to expanding Kazakhstan’s cultural potential. The country held a plethora of large-scale events in art, music, history, literature, and cinematography, presenting its perspectives both at the local level and on the world stage.
The Astana Opera  is set to stage a premiere of “Kalkaman-Mamyr” opera-ballet on Dec. 28-29. Photo credit: Astana Opera press service.
Amid ongoing geopolitical tensions, the Kazakh capital hosted the seventh Congress of Leaders of World and Traditional Religions on Sept. 14-15 with the participation of more than 100 delegations from 50 countries, including Head of the Catholic Church Pope Francis, Grand Imam of al-Azhar Ahmed Mohamed Ahmed El-Tayeb, and Patriarch Theophilos III of Jerusalem to promote interreligious dialogue and reinforce the commitment to the ideas of tolerance, openness, and trust. As part of his visit, Pope Francis conducted a holy mass in Astana, which gathered nearly 10,000 people.

All participants attended the Unity and Diversity concert, where Dimash Kudaibergen, the world-famous Kazakh singer, performed his new song, the work on which he began three years ago. His recent first long-awaited solo concert in Almaty was sold out in 15 minutes and gathered fans from 68 countries.
On the 30th anniversary of Kazakhstan’s membership in the United Nations Educational, Scientific, and Cultural Organization (UNESCO), the Representative List of the Intangible Cultural Heritage of Humanity included two more Kazakh cultural traditions – the Kazakh ancient performing art Orteke, which combines applied arts, music, dancing, and puppeteering, and Kozhanassyr’s oral folklore, which encompasses satirical miniatures, jokes, and folk tales about Kozhanassyr, the main character of humorous stories of the Muslim world.

A musician puppeteering a doll while playing dombyra – the art of Orteke. Photo credit: the press service of Kazakh Foreign Ministry.
In October this year, UNESCO celebrated two historical dates for the Kazakh nation – the 150th anniversary of a prominent scholar Akhmet Baitursynuly, the founder of the first Kazakh alphabet, and the 100th birth anniversary of opera and pop singer Roza Baglanova, to whom the organization held a tribute concert at its headquarters in Paris. The foreign diplomats in Prague and Budapest were also presented with the book “Akhmet Baitursynov and Alash,” published in Kazakh, English, and Czech.
In 2022, Kazakhs have celebrated the 100th anniversary of the great World War II poets, novelist Syrbay Maulenov and journalist Azilkhan Nurshaikhov, the 105th anniversary of prominent actress Khadisha Bukeyeva, the 120th anniversary of the leading Kazakh writers of the Soviet period Gabit Musrepov and Gabiden Mustafin, and the 125th anniversary of honored writer Mukhtar Auezov. The country has also marked 355 years of Kazybek Bi (bi–noble judge), the Kazakh judge and peacemaker remembered for his clarity and wit.

UNESCO held a tribute concert to legendary Kazakh singer Roza Baglanova in Paris. Photo credit: Adelina Vasiliev.
The Kazakh film industry was in the public spotlight throughout the year. In autumn, to the applause of their audience, the Kazakh cinemas screened the landmark film “Dos Mukasan” about the famous Kazakh rock and pop music group from the 1970s. It gave a feeling of trembling and goosebumps, making its viewers feel nostalgic, as every festivity in Kazakhstan was held to their songs playing. Another film, “Blind Love”, written by Kazakh figure skater and 2014 Winter Olympics bronze medal winner Denis Ten, premiered on July 28, four years after his tragic death.
From Oct. 27 to 30, Paris held the fourth Kazakh film festival to introduce local cinema to the public. It presented the “Paralympian” sports drama, the “Dawn of the Great Steppe” historical blockbuster, the feature films “The Last Session,” “Fire,” “Zoya’s Return,” “Tulip,” “Tarlan,” as well as the “Infiniti” film project.

Kazakh cinematography picked up steam at international film festivals. The feature film “Mukagali”, which tells the story of the Kazakh poet Mukagali Makatayev in his final years, won 10 international awards in one year. On Dec. 11, it received five awards at the Scottish St. Andrews Film Festival (SAFF).
Two Kazakh Films, “Baqyt” (Happiness) and “Goliath,” entered the longlist of the 80th Golden Globe Awards to take place in January next year. Before that, in September, the “Goliath” actors Berik Aitzhanov and Daniyar Alshinov won the Premio Bisato d’oro 2022 Best Actors award for their roles at the 79th Venice International Film Festival.
The film “Skhema” (“Scheme”) about teenage life won the Grand Prix at the 72nd Berlin International Film Festival (Berlinale). The film “Shturm” (Assault), about the seizure of the school, won the grand jury award for Best Narrative Feature at the 38th Los Angeles Asian Pacific Film Festival (LAAPFF). The Best Picture award was also given to the Kazakh film “Poet” at the Lisbon & Sintra Film Festival 2022 (LEFFEST) in Portugal.
Ahead of the New Year, the Astana Opera is staging a premiere of “Kalkaman-Mamyr”, an adaptation of a prominent Kazakh poet Shakarim Kudaiberdiuly’s tale of two lovers, in a new genre of opera and ballet. In July this year, it closed its ninth season with nearly 60,000 spectators of 200 performances and 45 exhibitions.
The Otyrar Sazy Kazakh Academic Folklore-Ethnographic orchestra celebrated the four decades of its work by performing the two-hour breathtaking orchestra play at the Nazarbayev Center in Astana.

Kazakh scientists opened new pages of the history of Kazakhstan.
An ancient Quran gifted to a Golden Horde ruler called Uzbek Khan, fragments of Mahmud Churas’s history book, and medieval maps revealing the territories of Kazakhstan were discovered in the largest archives of Russia, Türkiye, and Hungary.
Kazakh archaeologists have uncovered the remains of more than 10 melting furnaces made of stone, which were constructed by the Saka tribes in approximately the 7th-6th centuries BC in the East Kazakhstan Region. The researchers have also excavated a person’s household items, supposedly from the Stone Age, in the country’s oldest cave in the southern part of the country.

Overall, this year has contributed to Kazakhstan’s cultural and educational growth, paving the way for the country’s development in the years to come.