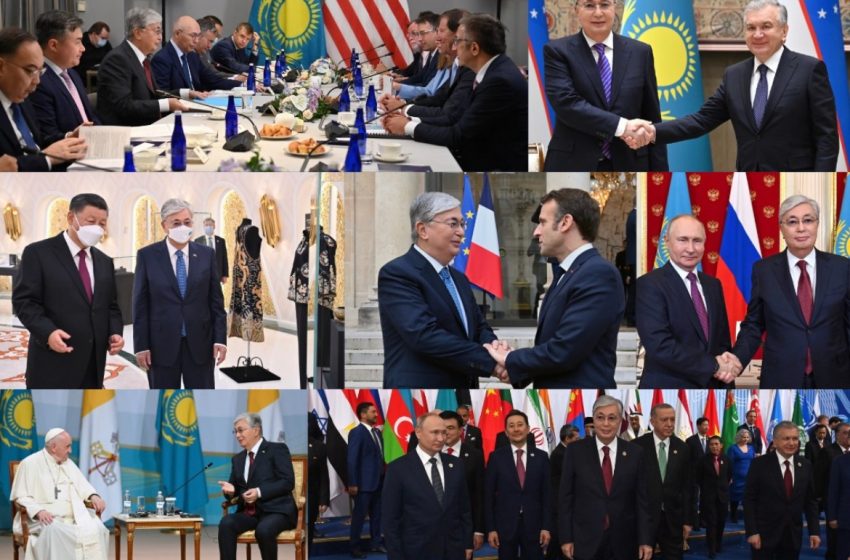 Welcoming 2022, the people of Kazakhstan hoped it would bring more good to the world, which is still reeling from two years of uncertainty and the pandemic that took many lives. 2022 can hardly be called an easy year – the ongoing pandemic, rising geopolitical confrontations, economic slowdown, and war. It reminded us all of the ever-growing need for constructive dialogue and diplomacy. In this regard, Kazakhstan sets an excellent example for the rest of the world.

This year, Astana once again reaffirmed its potential as a dialogue platform. The Astana Times presents some major highlights of Kazakhstan’s unique diplomatic work in 2022.

Kazakhstan’s presidency at the CIS culminated in the Oct. 14 summit of the CIS heads. There were also two informal summits in St. Petersburg in October and December.
“Our joint efforts are reflected in the documents adopted following the Astana Summit in October. Particular attention throughout the year was paid to the implementation of the tasks of the CIS Economic Development Strategy until 2030,” said President Kassym-Jomart Tokayev, summing up the results of Kazakhstan’s work at an informal CIS summit on Dec. 26.
Over the year, Kazakhstan focused on improving the efficiency of the CIS, adapting its institutions and mechanisms to tackle new challenges, strengthening the coordination of foreign policy activities of member states on global and regional agenda issues, expanding CIS cooperation with other regional organizations and integration associations, facilitating post-pandemic recovery of the CIS member states, introducing digital technologies and improving the quality and accessibility of transport infrastructure, among others.
Conference on Interaction and Confidence Building Measures in Asia (CICA)
This year, Kazakhstan also extended its chairpersonship at CICA at the organization’s sixth summit in October. with a focus on expanding supply chains and promoting sustainable growth, ecology, and food security.

Sixth CICA summit participants
CICA, founded at Kazakhstan’s initiative, is a forum that builds on the concept that there is a close link between peace, security, and stability in Asia and the rest of the world, which can be achieved through dialogue and cooperation leading to a common indivisible area of security in Asia where all states co-exist peacefully, and their people live in peace, freedom, and prosperity.
Eleven heads of state, including presidents of Azerbaijan, Belarus (observer), Iran, Kazakhstan, Kyrgyzstan, Palestine, Russia, Tajikistan, Türkiye, and Uzbekistan, as well as the Emir of Qatar and nearly 50 delegations attended the summit, deemed one of the most significant post-pandemic foreign policy events in the country and on the continent.
The sixth summit concluded with the adoption of the Astana Statement that launched the process of transformation of CICA and the extension of Kazakhstan’s chairpersonship for 2022-2024
This year the summit’s decision granted Kuwait the status of a CICA member state making it the 28th member country.
Congress of Leaders of World and Traditional Religions
Building on its decades-long efforts to promote interfaith dialogue and peace, Kazakhstan has hosted the Congress of the Leaders of World and Traditional Religions every three years since 2003. The congress was supposed to be held in 2021, but because of the pandemic, it was postponed until this year.

Pope Francis and President Tokayev
With over 100 delegations from more than 50 countries, the congress focused on the role of religious leaders in spiritual and social development in the post-pandemic period. The highlight of the two-day event was the visit of Pope Francis.
Nearly 10,000 people attended a holy mass by Pope Francis for Roman Catholics and representatives of other religions and their confessions.

Holy Mass at the Expo square
President Tokayev and Pope Francis also addressed the representatives of civil society and the diplomatic corps on Sept. 13.
President Tokayev’s address at the UN General Debates
In 2022, after a two-year break, Tokayev visited New York to address the General Debate of the 77th UN General Assembly. Speaking from the rostrum of the General Assembly, he emphasized the importance of sticking to the organization’s fundamental principles.
Tokayev called the international community to “rethink the linkages between three primordial principles: the sovereign equality of states, the territorial integrity of states, and peaceful coexistence.”

Tokayev speaks from the UN rostrum
“These three principles are interdependent. To respect one is to respect the other two. To undermine one is to undermine the other two. When the global disarmament regime – both conventional and nuclear – weakens, these three principles are threatened.  Conversely, as these three principles are respected, they grow in strength. (…) This is the global prosperity dividend,” said Tokayev.
In New York, the President attended the Global Summit on Food Security, reaffirming Kazakhstan’s readiness to “act as a reliable supplier of grain and other basic types of food” and to expand cooperation with the Islamic Food Security Organization and UN institutions in the region in procurement projects, including for the needs of Afghanistan.

Tokayev chaired the Kazakh-American Investment Roundtable in New York on Sept. 20. Photo credit: Akorda.kz
Samarkand Summit of the Shanghai Cooperation Organization
The SCO summit in Samarkand was in the global spotlight as it brought together the leaders of the SCO member states and observer states for the first time in three years in a face-to-face format.

Addressing his counterparts, President Tokayev said the task is transforming the SCO into a global economic platform, noting the huge economic potential of the SCO member states that account for nearly a quarter of the world’s GDP or more than $23 trillion. Photo credit: Akorda.kz
President Tokayev called on the SCO member states to expand economic cooperation and focus on the transit-transport sphere, food, and energy security.

On the eve of the summit, leaders of SCO member states, observer states, dialogue partners and invited guests toured some of the major sites in a historic city of Samarkand. Photo credit: Akorda
In terms of logistical interconnectivity, Tokayev noted the big potential of the China-Europe route and the Trans-Caspian international transport route. He also said Kazakhstan supports the efforts to expand transport routes between Central Asia and South Asia and to develop North-South and East-West trans-Eurasian corridors.
Samarkand summit of the Organization of Turkic States
The summit of the Organization of Turkic States leaders kicked off on Nov. 11 in Samarkand. The organization’s four founding member states are Azerbaijan, Kazakhstan, Kyrgyzstan, and Türkiye. Uzbekistan joined as a full member in October 2019. Hungary received observer status at the organization in September 2018, and Turkmenistan became an observer member in November 2021.

Organization of Turkic States summit participants pose for a group photo
The summit adopted a five-year strategy. “Actively participating in addressing the issues of regional and global agenda, we should become a powerful and influential force. The current geopolitical and geo-economic contradictions negatively impact the Eurasian continent’s economy and transport and logistics system. We must show solidarity to confront all challenges and threats jointly,” said Tokayev, addressing the summit.
Assel Satubaldina, Senior Editor, The Astana Times.