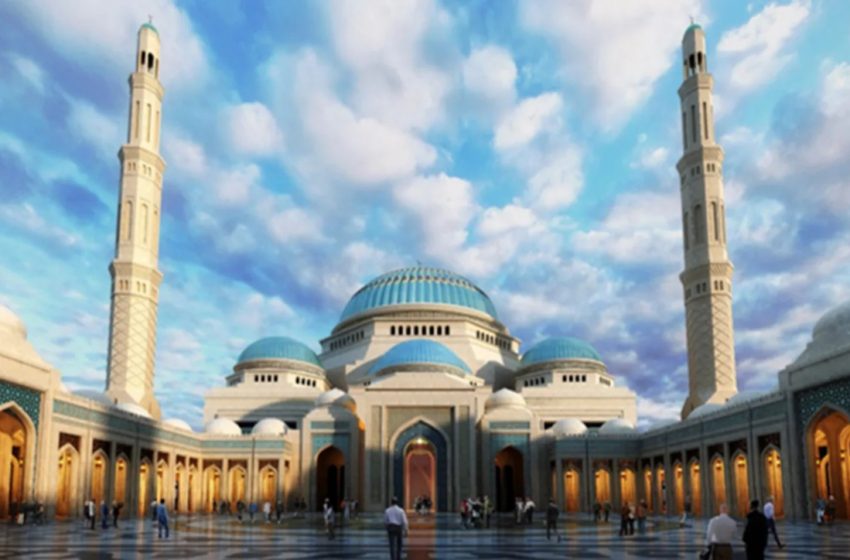 Nur – Sultan – Kazakhstan’s first president Nursultan Nazarbayev inaugurated on 14 August 2022 the largest mosque in Central Asia, at the opening ceremony in the capital city, Nur-Sultan:“On this holy Friday, we are opening a beautiful mosque in our capital city, and this is an important event not only for our capital city but also for all our citizens, Muslims.”

This Grand Mosque is an Iconic Mosque in the capital of Kazakhstan. The land allocated for this project is directly adjacent to Medical Centre Hospital of President’s Affairs, Administration of the Republic of Kazakhstan. This site is also very close to the Expo 2017 pavilion.
This Grand Mosque which will cater for 30,000 worshippers and consists of Ground, First and Second floor usable levels with the main prayer spaces of Haram and Sahan on the First floor level and car parking at the ground floor.

Nur-Sultan Mosque has already been ranked one of the world’s ten largest mosques, with the total capacity of 235,000 worshippers. The total area of the land plot on which the mosque stands is ten hectares, while the total area of the holy place itself is more than 68,000 square meters. The height of its main dome is almost 90 meters, while its minarets rise at a height of 130 meters.
The new mosque is three times bigger than the former largest Hazret Sultan Mosque also located in the Kazakh capital. With a population of slightly more than 19 million, Kazakhstan is a Muslim-majority country, with over 72 percent of the country’s overall population following Islam. More than 2,300 mosques are registered across the country. Less than 25 percent of the population of Kazakhstan is Christian, including ethnic Russians, Ukrainians, and Belarusians.

Ancillary usable spaces like administration, wedding hall, Quran center, conference hall, museum, etc. are distributed on the periphery of the Sahan on the first floor level.
The Mosque Design is innovative and the facades are designed to cater for the extreme climate conditions. Astana has an extreme continental climate with warm summers and long, very cold, dry winters. Summer temperatures occasionally reach +35 °C (95 °F) while −30 to −35 °C (−22 to −31 °F) is not unusual between mid-December and early March. Typically, the city’s river is frozen over between the second week of November and the beginning of April. Astana tends to have frequent high winds, the effects of which are felt particularly strongly on the fast-developing Left Bank area of the city.

There are now 2,683 mosques in Kazakhstan according to the data provided by the Committee on Religious Affairs of the Ministry of Information and Social Development of the Republic of Kazakhstan.
Every project involves balancing cost, schedule, and quality constraints with an owner’s vision, but for Uluc Gucar, a cost control expert on the Astana-20 State Fund’s Nur-Sultan Grand Mosque project, the scale is massive. Located in Kazakhstan’s capital city of Nur-Sultan, the Grand Mosque will be central Asia’s largest mosque when completed. In addition to its sheer size, the Mosque is adorned with a variety of handmade ornamentation inspired by traditional Islamic and Kazakh designs.
The Mosque’s size becomes even more impressive as worshipers are drawn in by tree-lined landscaping planted over nearly 25 acres. Panels covering the Mosque’s blue domes give them a fluted appearance, adding texture, contrasting with the white domes, and helping to break up the sky’s sea of blue. Encircling some of the larger domes is traditional Arabic calligraphy.

Around the largest dome, a 197.8 meter calligraphic scroll, designed by hand, will set a new world record for the longest calligraphic manuscript in the world. Approaching the front entrance, the Mosque’s bilateral symmetry becomes apparent, strengthened by the mirroring effect of reflection pools that sit in front of the building. A uniform procession of arched windows and doors encircles the Mosque. Repeated geometric and vegetal patterns in masonry, glass, and mosaic abound.
Structurally, all of these features are designed to withstand the extreme climate conditions in Kazakhstan. Nur-Sultan has warm summers and long, cold winters. Cold temperatures are exacerbated by high winds year-round. In fact, the city is the second-coldest national capital in the world. To help deal with the weather, the Mosque’s 6,300 SM Sahan has heated floors to provide for visitor comfort.

Moving Inside
The Grand Mosque is large enough to comfortably welcome more than 30,000 worshipers at a time. Once inside, visitors will enjoy an expansive prayer space, several auxiliary locations, and a seamless continuation of the artistic features on the Mosque’s exterior. The Mosque includes two stories and a basement. In addition to places of worship, the facility includes conference and wedding halls, classrooms, offices, a library, a morgue area for funerals, belowground parking, and a TV studio.
After stepping through a massive, hand-carved wooden door, a visitor will enter the Sahan, decorated with a floor design drawn from the Quran. Many of the Mosque’s ancillary spaces surround the Sahan and can be reached through doors along the Revak, or portico. The Revak is decorated with handmade ceramic tiles with national Kazakh emblems and ornamentation.
Inside, the bright color scheme of blue, gold, and white keeps the Mosque’s interior bright. Natural light pours in from the procession of stained-glass windows with floral and geometric motifs surrounding the mosque and the domes above. This natural light serves to illuminate the engravings, carvings, embroidery, calligraphy, latticework, tile art, glasswork, chandelier lighting, and carpeting on display throughout the Mosque.
To help diffuse the natural light, the 18,175 SM prayer hall contains several large chandeliers made up of millions of multi-colored crystals. These capture and diffuse natural light during the day to make the huge hall sparkle. The five chandeliers contain more than 3 million crystals altogether. The largest has nearly 1.5 million crystals on its own.
Above the largest chandelier is the main dome. It is composed of glass-fiber-reinforced gypsum panels supported by hidden steel ribs. Astral motifs and a darkening blue gradient conjure an image of the heavens. Traditional Kazakh vegetal patterns and Arabic calligraphy are also hand painted on the main dome and many of the other domes in the Mosque. Like the colors of the mosque, which mirror Kazakhstan’s flag, the Kazak motifs help root the Mosque in the history of the nation and express the client’s ambition to create a structure that holds a central role in Kazakhstan’s future.
Beneath the chandeliers and the domes, light bounces from lustrous tiled columns. On the Qibla wall, the wall oriented towards Mecca, is the largest mosaic wall found in any mosque. At 100 meters long, 22.4 meters high, and with 25 million glass mosaic pieces, individually cut and placed by hand, the wall provides an epic and sparkling focal point for worshipers at the Mosque. In addition to the mosaic, the 99 names of Allah are displayed along the wall in elaborate calligraphy.
A hand-made medallion carpet provides a comfortable place to worship. In colors matching the building’s palette, the carpet consists of wool woven into intricate vegetal and geometric patterns. Another world-record feature, at 70 meters in diameter, the Mosque’s medallion carpet is the largest in the world.
Outside of the main hall, slightly different color schemes and architectural flourishes help differentiate among the Mosque’s diverse spaces. In the banquet halls, for example, a golden pattern predominates, while in the elevator hall, there are Sicilian perlato marble walls. Despite these differences, large spaces, repetition of Islamic and Kazakh patterns, and symmetry create a sense of unity throughout the Mosque’s interior.
Finding Balance with Project Management Support