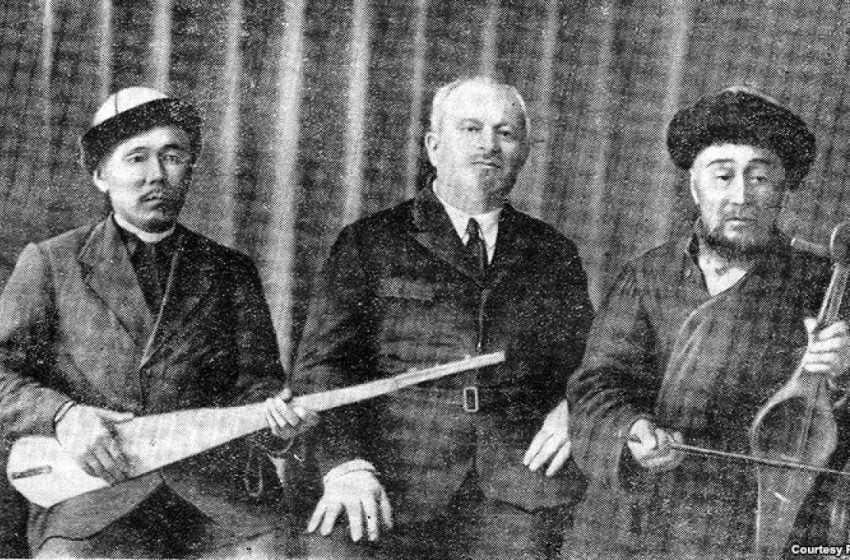 ASTANA – Kazakh national music kui, traditionally played on dombra or kobyz, captivates fans from all over Kazakhstan. The music has become so popular that it prompted the Kazakh Ministry of Culture and Sport to organize a festival of traditional music Shertpe Kui that took place in Almaty during Dec. 1-3, promoting the music genre that forms an important part of the Kazakh cultural heritage.

The winner of the festival among 45 participants became Madiyar Suleimenov earning the grand prize of 1 million tenge (US$2,130). Photo credit: press service of Kazakh Ministry of Culture and Sport
The three-day musical event took the viewers on a journey through the rhythms of the Kazakh world. The festival was composed of two rounds and featured young dombra players aged 16-35 who competed performing five works of the traditional shertpe kui school and one modern composer’s melody. The winner of the festival among 45 participants became Madiyar Suleimenov earning the grand prize of 1 million tenge (US$2,130).
The kui is a traditional Kazakh piece of music that is not just a set of rhythms, it takes one back to the remote past where Kazakh nomads expressed through it their liberty, joy, as well as misery and daily worries. Music was pervasive in everyday Kazakh life: it could be heard during national holidays, as part of rituals and ceremonies, like weddings or the Nauryz  (new year) celebration.
The word “kui” (küy) in the Kazakh language also correlates with the notions of “mood” and “condition.” From this one can understand the psychologism and the nature of the genre intended to reflect all moves of the human soul.
Kazakh traditional art of dombra kui was included in the UNESCO (United Nations Educational, Scientific and Cultural Organization) list of Intangible Cultural Heritage of Humanity in 2014.
Dombra, a traditional two-string Kazakh instrument remains the main instrument to play kuis. Kuis on dombra are divided into two major categories: shertpe kui and tokpe kui, depending on the flow of the music.
Shertpe kuis are often low-pitched and played on dombra with the tips of the fingers of the right hand. While tokpe kui is performed with an emphasis, with a full swing of the right hand which gives the sound a flowing nature.
The Limp Kulan legend – the power of delivery of Kazakh kui
The beauty and ancient history of Kazakh kui has always fired the imagination of the people. Here is the captivating story on the delivery power of kui that lies in the performer’s mastery.
“Aksak kulan” (The Limp Kulan) is a Kazakh folk kui played by Ketbuga, based on the legend, the events of which are related to the death of Jochi, the son of Genghis Khan, the emperor of the Mongol Empire.
AIBARSHYN AKHMETKALI, Astana Times