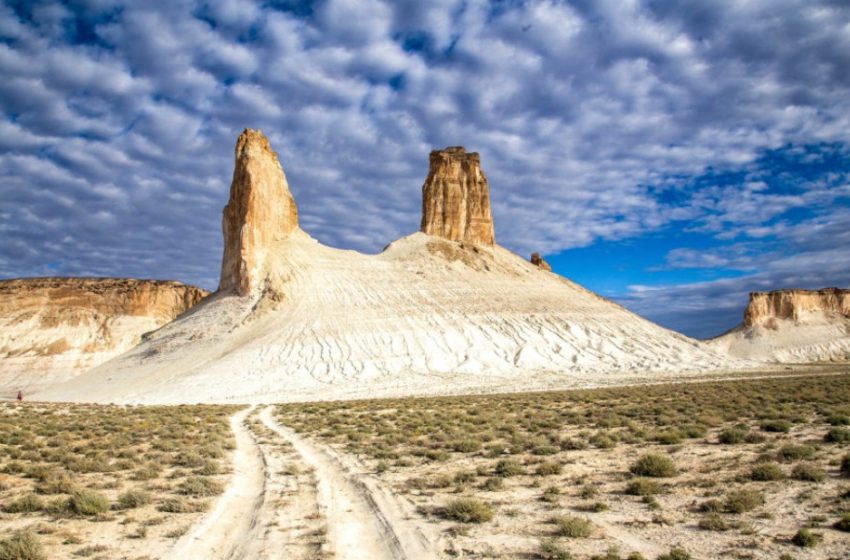 One of the most interesting sights on the peninsula is the valley of stone balls called Torysh. There are several hypotheses of their origin, however the exact cause is still not known.
Mangyshlak Peninsula is located in the southwestern part of Kazakhstan on the eastern coast of the Caspian Sea. It was a shelter for ancient civilizations. Many monuments from the Paleolithic, Neolithic and Eneolithic times have been found here.
During the Great Silk Road, Mangyshlak served as a gateway between East and West. Throughout its history, the peninsula was part of the possessions of Turkmenistan. This is confirmed by numerous Turkmen burials found on its territory.
The region is rich in oil fields. Copper, manganese, rock crystal and rare ores are also mined on the peninsula.
Despite its harsh climate, about 263 plant species and many animal species are found on the territory of Mangyshlak. Among 111 bird species, flamingos, saker falcon, peregrine falcon, vulture, steppe eagle, golden eagle, eagle owl, jacks and many others are listed in the Red Book.
Among mammals, the Ustyurt mouflon, gazelle, caracal, manul, dressing, sand cat, honey badger, cheetah live here. The famous symbol of the peninsula is the endemic Caspian seal, the smallest seal in the world.
Mangyshlak is also famous for its healing springs. Here you can even find thermal springs similar in temperature to the unique springs in Kamchatka.
The Mangyshlak Peninsula is dotted with ancient necropolises like the necropolis of Sultan-epe, Kety-Baba or Beket-Ata. In addition to endless deserts reminding the Martian landscapes, Mangyshlak is surrounded by extraordinarily beautiful mountains like Northern Aktau and Shergala and golden sandy beaches like Blue Bay.
These amazing natural and architectural sites of the peninsula attract curious tourists from all over the world.
For casual visitors at first glance may seem Mangistau colorless withered, tired and sun burnt by the wind. For people buried in this land back – is a blessed land. Each stone carries a history of the peoples who once inhabited the Mangistau.Since ancient times, the peninsula was called Mangyshlak. The first mention of the peninsula Mangyshak found in the annals of IX century Arab geographer, Al – Istahri called Siyah-Kuh (Black Mountain). In sovereign Kazakhstan adopted a different name – Mangistau. Although the right-word, the old-timers today with love and tenderness is called paternal land still “Mangyshlak. Some linguistic scholars argue that “Mangyshlak” means “edge of thousands of wintering, others -” big village “.The peninsula is famous for its natural diversity: a desert landscape is replaced by mountain ranges, plateaus with steep escarpment adjacent to seascapes, caressing the eyes and soul, an oasis in the rocky gorges – with the deepest depression of the CIS countries, Karagiye. Unique nature reserve is considered the peninsula, where “as in the reserved box, assembled the entire arsenal of different manifestations of the nature of the desert”. So wrote on the peninsula, Professor BA Fedorovich.From ancient times accepted Mangistau called edge 360 of the saints. Why? The fact that 360 murids, students Khoja Ahmed Yassaui – Shopan-ata, Shakpak-Ata, Koshkar-Ata, Masato Ata, Sultan-EPE, Kent-Baba, and others – were sent to Mangyshlak distribute philosophical doctrine Sufism. Sufis have left a deep imprint on the history of this land since has become sacred. Underground mosques, carved into the rock plumb – sight edge. Endless streams of pilgrims from different cities of Kazakhstan, as well as other parts of the Earth to the unique religious buildings and mosques.Wealth of the region, the abundance of stone, shell, allowed people of different tribes and peoples to perpetuate its mark in the history of the region. Two-thirds of all monuments of Kazakhstan is situated on a peninsula Mangyshlak. At different times and ages tribes succeeded each other, leaving a trail of rock paintings, tribal marks (tanba), monuments. Therefore it is difficult to compete with the inhabitants of the peninsula in the wealth of historical and cultural monuments.Great Silk Road passed through the desert region of Mangistau. In the Middle Ages Mangyshlak serves as a gateway of trade and economic ties between East and West. Successor of the Great Silk Road trade mission in the new time was Aktau sea port, which is also called “the eastern gate of Kazakhstan”, a transportation artery in Asia and Europe.And once this territory reigned ancient and mighty Tethys Ocean, distinct traces of which still remain. Five or even ten million years ago in a land of natural disasters, called today Ustyurt, rose, and of the sea had to retreat, to withdraw further into the bowels of the earth, draining his enormous territory, now known as Peninsula Mangyshlak. The remains of ancient sharks, shellfish still find scientists.Treasures peninsula has long called Mangyshlak (Mangystau) purpose. One third of all oil produced in Mangyshlak. In addition to live oil, mineral wealth of the peninsula is rich in copper, manganese, phosphate, rock crystal, rare ores, uranium. It was here that was launched the world’s first industrial fast reactor. Currently, old-reactor worked his term. Been replaced by a unique water desalination plants, yielding water of the young people of the city of Aktau, which surprised the guests by his green attire.