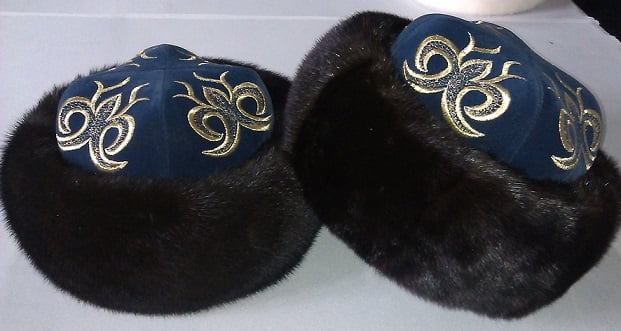 Throughout its history, the people of Kazakhstan very carefully and with great reverence treated headgear. In the country there are many traditions associated one way or another, with the caps. For example, if someone with a head sdёrnet other headgear, it will be perceived as a monstrous insult. If a person, after returning home, throw his hat carelessly, it could spell his years of failures and misfortunes.
At all times, Kazakhs carefully took off their hats, trying not to damage or stain them. Especially feared Kazakhs to their headdress fell on the floor or a chair. This could bode owner caps years of serious ailments. By giving a complete ban fell own headgear that the ancient dowry accumulated success and vitality of man. It was believed that such a gift from the giver take all the luck. Unsweetened would have and the one who would get the hat as a gift. There was a widespread belief that with such a gift a man could receive all the problems and hardships of the giver person. It is worth noting that give headdress in Kazakhstan is possible, but in this case it should be a completely new cap.
A classic hat in Kazakhstan is considered normal skullcap, dubbed “takiya”. It can be worn by people of all ages and social ranks. The most common skullcap worn over the head. If desired, it can be covered with the help of other hats.
For the manufacture of traditional Kazakh hats used a variety of materials, but mostly it was the more expensive cotton or soft tissue، cloth, silk; and velvet .
The process of manufacturing caps held solely on the basis of a woven which has been quilted together with the upper part. In order to make the headdress best performance characteristics, skullcap sews a mandatory common lines. Another way to give strength hat was laying in the upper part of the skullcap of cardboard or paper. Traditional Kazakh headwear was decorated later with the help of different patterned embroidery.
Today, the younger generation opts skullcaps entitled “zer takiya”. Decorated with gold thread a headdress made of silver or gold. People of advanced age have chosen dim caps, which are used in the manufacture of the thin lining of the coat.

The men’s hats
Kazakhstan Men are distinguished by their love of the bright cap with a luxurious appearance. Regardless of social rank, men prefer the hat made of felt – “kalpak”.This headpiece is made to wear in the summer. A cap having a conical shape, made of felt white. The headpiece has high and narrowed the crown. Top tip “Kalpaka” is rounded or sharp. The crown caps, according to ethnographers, cross-linking of two identical halves.
Representatives of more affluent classes were “kalpak” features more grandeur. It was called a cap for the rich aristocracy and nobility “ayyr kalpak”. Headgear was shaped like a cone, the field is curled up. The inside of the cap is decorated with the help of thick fabric or felt. The outer side of the headdress decorated with the help of satin, velvet and floral patterns made using gold thread.
In the “Borik” was used as the main summer headgear. Hat was shaped like a perfect circle with a small edge, made of natural fur. In some cases, a summer hat decorated using velvet. During the onset of the cold season Kazakh men dressed warm enough headdress called “tymak”, which was made from the wool of sheep.Children used the cap, which were made of fox fur.
These hats created from large wedge and crown, have repeatedly been shown to be effective even in conditions of severe cold Kazakh. Winter men’s headdress was made of felt with further wrapped with a variety of fabrics. Occipital part of the headgear is insulated using broad fields made of fluffy fur.

ُThe women’s hats
In any Eastern country female headdress plays not so much aesthetic as social role. Largely marital status hostess hats defined the list of possible options. The greatest freedom in terms of choice of headdress were only ladies, lawfully married. Married women could choose headdress, on the basis of cultural traditions prevailing in their way, or clan. While the girls had to be content with the meager selection of caps:” Borik ” – a warm hat, complete with edging made of fur; ” Takiyeh ” –and summer option ” Borika “.
Classical female “takiya” was the most popular among girls headdress. As a rule, skullcap was circular in shape, differing little weight. The average height of a cap does not exceed fifteen centimeters. The upper part of the “takii” decorated with white feather owl, and on both sides of the headgear applied a variety of jewelry made of precious or semi-precious stones.

Winter version of the maiden cap, which was called “Borik”, decorated on both sides with the help of various furs: Otter; Fox; and Beaver.

Winter “Borik” was very similar to the traditional men’s winter headgear. The only thing that distinguished the male and female caps, is a method of attaching fur band. In the ladies’ hat he was always on the outside and never turned away. These hats girls had to wear until the formal marriage. On the day of the wedding, they went through a special ritual of farewell to childhood.