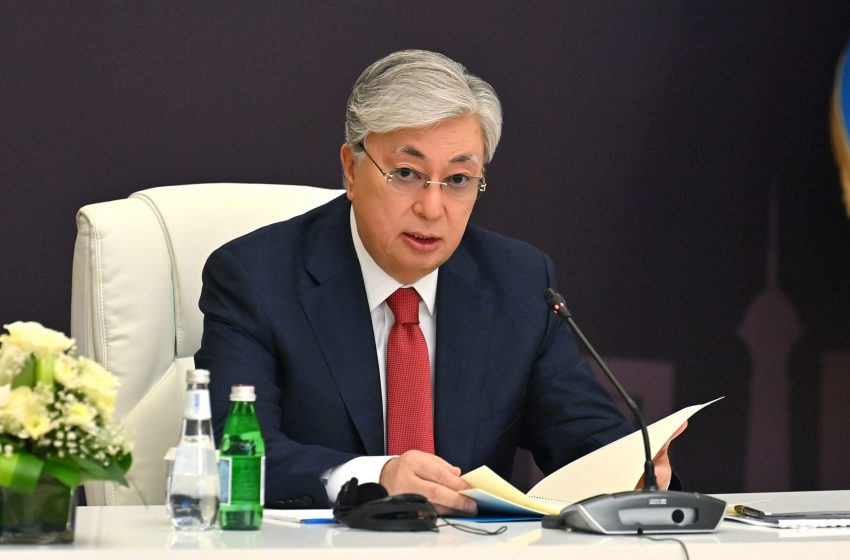 Astana – Kazakh President Kassym-Jomart Tokayev stressed that the process of democratic, social, and political transformation is irreversible and that the ultimate goal is to build a presidential republic with strong parliamentary traditions, stressing the commitment to having a strong president, an effective parliament, and an accountable government, preventing any attempt to monopolize state power, and strengthening Stabilizing the political system, contributing to the rise of new generations of leaders.

In his speech during a meeting with heads of foreign diplomatic missions accredited to Kazakhstan, the Kazakh president added: “The strategy of our country is to transform the entire society towards democracy and modernization is not a “false reform”, but a real one, stressing that political reforms must go hand in hand with economic transformation. Inclusive, he said: Our ultimate goal is to build a just Kazakhstan, where every citizen enjoys equal conditions and opportunities to unleash his potential.

The president signed six important laws that were adopted after the results of the national referendum on amendments and additions to the constitution that was held in June 2022, which led to the formation of a new model of government interaction, enabling citizens to participate in government, and strengthening guarantees to protect human rights and freedoms. The laws are Constitutional Court Act, Law on the Commissioner for Human Rights, Law on Public Prosecutor’s Office, Law on Amendments, and Additions on Administrative Violations.

President Tokayev added that his country pursues a balanced international foreign policy, establishes diplomatic relations with 186 countries, and has 104 diplomatic missions in 70 countries, including 71 embassies and 30 international organizations, explaining that within three and a half years, great work has been accomplished on political modernization and protection. human rights, implementing four separate political reform packages, empowering citizens, and promoting national dialogue.

President Tokayev explained that his country has taken a decisive step towards a presidential republic with a strong parliament and holding a national referendum for the first time since 1995. He said: “The opportunities for political parties are gradually expanding, intensifying political and social participation, stimulating competition between parties, strengthening democratic principles and human rights, and focusing on the environment Free and competitive media outlets, explaining that a media law is currently being drafted.

We are also determined to continue to serve as the most attractive investment destination in this part of the world. In just 6 months of this year, foreign partners have invested about $15 billion in our economy, up 30% from the previous year.

The President listed the promising areas for his country in its contribution to ensuring regional and global food security, as Kazakhstan is among the top ten grain exporters in the world, providing annually more than 5 million tons of wheat and 1.5 million tons of flour, and launching a national project to develop the agro-industrial complex. , with the aim of increasing the productivity of the sector by 2.5 times.

During his speech, the Kazakh president explained: “Kazakhstan has great potential as a provider of sustainable supply chains, as more than 80% of land traffic along the China-Europe corridor passes freely through Kazakhstan, and according to the World Bank, developing transit and transportation capabilities can contribute to increased output Cumulative GDP of 15% in Central Asian Countries”.

He said, “Kazakhstan is already playing an important role in the Belt and Road Initiative, as the international transit route through the Caspian – the so-called Middle Corridor – is becoming increasingly important. We must work together to develop this path that is critical to diversifying energy and food supplies and security, as well as collaborating with the Samruk-Kazyna National Wealth Fund, which is currently undergoing a transformation focused on increasing transparency and efficiency, among the 30 largest sovereign wealth funds in the world. , with assets of $70 billion, and among the main initiatives regarding the sovereign wealth fund, the fund’s portfolio companies will be privatized, and the largest companies of the fund such as the National Oil Company, the national airlines, and railway companies will be put up for public subscription soon, and 700 large and small companies to be privatized.

The President said: “This year, we plan to increase our exports of IT products and services by 3 times compared to 2020 from $33 million to $100 million, and we plan to significantly enhance human capital by training 100,000 IT professionals globally by the year 2020. 2025, and we plan to attract $150 billion in foreign direct investment within the next seven years.

The Kazakh president stressed that his country is open to international cooperation, defends the principles of equality, sovereignty, and territorial integrity of states on the basis of the United Nations Charter and international law, and maintains and strengthens trust, friendship, and strategic partnership with interested countries of the world, and said: “We will continue the proactive partnership with all members of the global community, including ASEAN, the Middle East, Africa, and the Americas, strengthening our work with international and regional organizations is an important diplomatic priority.