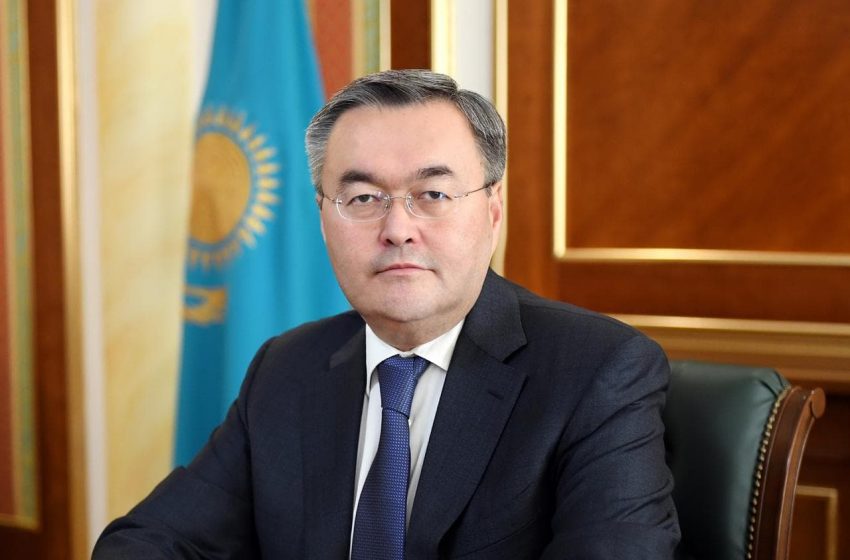 This year we are celebrating a symbolic 30-year milestone in the formation and implementation of an independent foreign policy of our state.

Over the period of time that has passed since then, Kazakhstan’s foreign policy has proved its success, ensuring stability and security along the perimeter of our borders and favorable conditions for internal development.

Kazakhstan has established itself as a predictable, reasonable, and responsible participant in the global system of international relations. It was the effective conduct of foreign policy that allowed our country to avoid involvement in conflicts with other states. As a result, today we do not have tense relations with any subject of the international community. Through this, Kazakh diplomacy has made a significant contribution to strengthening our statehood.

Since gaining independence, the main principle of Kazakhstan’s foreign policy has been multi-vector and balance. As part of this course, Kazakhstan has become a member of many authoritative international organizations, interacts on an ongoing basis with the UN and its various specialized agencies (UNDP, WHO, IMF, UNICEF, UNESCO, and others), strengthens cooperation with other influential multilateral structures such as the WTO, the World Bank, ADB, EBRD, IAEA and so on.

Speaking about the landmark achievements of our foreign policy, first of all, we should highlight the completion of the process of legal registration of the state border of the Republic of Kazakhstan. I note that the problem of delimitation and demarcation of the country’s external borders is a very sensitive issue, which in many regions of the world has been the cause of tension and military conflicts for centuries. We were able to resolve the border issue with China, Russia, and our neighbors in Central Asia in a short historical period. This was done without prejudice to national interests. This should also include the signing of the Convention on the Legal Status of the Caspian Sea, which secured its status as a zone of peace and mutually beneficial cooperation.

Our active participation in the cause of nuclear non-proliferation has become a kind of “visiting card” of Kazakhstan. In open and behind-the-scenes conversations, the leaders of various countries continue to express their sincere respect for Kazakhstan for voluntarily giving up the fourth-largest nuclear arsenal. The recognition of our efforts in this direction was the decision of the UN General Assembly to declare August 29 – the date of the official closure of the Semipalatinsk test site – the International Day against Nuclear Tests. Last year we celebrated the 30th anniversary of this historic event. I would like to emphasize that Kazakhstan remains committed to the efforts to adopt by all UN member states the Universal Declaration on Building a World Free of Nuclear Weapons.

On September 8, 2006, Kazakhstan, together with its neighbors in the region, signed the Semipalatinsk Treaty on a nuclear-weapon-free zone in Central Asia (CAWFZ), the first such zone in the Northern Hemisphere, as a manifestation of concrete actions to strengthen the international nuclear non-proliferation regime. An important addition to it was the protocol on negative assurances, in which the states possessing nuclear weapons undertake not to apply it to the parties to the treaty. Last year, the foreign ministers of the states parties to the treaty made a joint statement on its 15th anniversary, in which they reaffirmed their unshakable commitment to its provisions and called on the American partners to complete the ratification process of the above protocol as soon as possible.

In addition to efforts to promote the idea of ​​a nuclear-free world, Kazakhstan is respected by the international community for its meaningful contribution to strengthening global and regional security.

Our country came up with the idea of ​​creating a Conference on Interaction and Confidence Building Measures in Asia, which today brings together 27 participating countries and 8 observer states. The goals and objectives of the CICA are reflected in the very name of the structure. Moreover, its areas of activity began to cover such new areas as epidemiological safety, public health, information technology, digitalization, and so on. All this is dictated by the need to adapt to new realities and the needs of the international agenda.

Among the historical achievements of domestic diplomacy, it is worth highlighting the election of Kazakhstan as a non-permanent member of the UN Security Council in the period 2017-2018. The international community highly appreciated the responsible and principled position of Kazakhstan in the framework of this mission.

The international specialized exhibition “EXPO-2017” on the theme “Energy of the Future” was successfully held, showing our substantive contribution to the development of “green” technologies.

During the years of independence, Kazakhstan has created its own unique model of interethnic and interfaith harmony. The landmark visit of Pope John Paul II to Kazakhstan in autumn 2001 was a reflection of the global role of Kazakhstan in this context. Less than two weeks after the tragic 9/11 attacks on the United States, which sharply escalated talk of an imminent “clash of civilizations”, this visit drew wide international attention to the example of Kazakhstan as one of the countries actively promoting a culture of peace and effective interfaith dialogue both nationally and internationally. and on a global scale.

Subsequently, our country became the initiator of a number of demanded initiatives in the field of inter-civilizational and intercultural dialogue. The most famous among them is the regular holding in the capital of our country since 2003 of the Congress of Leaders of World and Traditional Religions. As you know, on September 14-15 this year, its seventh meeting will be held, participation in which has already been confirmed by Pope Francis, Patriarch Kirill of Moscow and All of  Russia, Chief Rabbis of Israel Ashkenazi David Lau and Sephardic Yitzhak Yosef and other authoritative leaders of various religious communities worldwide.

The priority direction in Kazakhstan’s foreign policy is still the course toward strengthening multilateral diplomacy and expanding cooperation with international and regional organizations. Here I would like to especially note the successful holding of summits of the OSCE, OIC, SCO, and other organizations in Kazakhstan as the presiding country.

As part of the processes of regional economic integration, Kazakhstan is a responsible member of the Eurasian Economic Union. Within the framework of this association, trade, economic and investment ties are being built up, and large-scale joint projects are being implemented.

In accordance with its reputation as an impartial mediator, over the years Kazakhstan has made a meaningful contribution to resolving the situation around the Iranian nuclear program, the diplomatic crisis between Russia and Turkey in 2015-2016, launching the Minsk Process on Ukraine, and holding negotiations of the Astana Process on Syria.

Our country has become a full member of the World Trade Organization and a party to the Paris Agreement on Combating Climate Change. At the same time, climate diplomacy is becoming a new important area of ​​foreign policy. Today we face an ambitious task – to decarbonize the economy by 2060. To do this, we are developing a concept for low-carbon development. We systematically promote renewable energy sources, the share of which in the country’s energy balance should reach 15% by 2030, and we are actively involved in the global processes of developing the “green” economy.

Over the past two years, the COVID-19 pandemic has become a new unexpected global challenge, exposing humanity’s vulnerability to biological threats. In this regard, President of the Republic of Kazakhstan Kassym-Jomart Tokayev at the 75th session of the UN General Assembly proposed the creation of an International Agency for Biological Safety, which would be aimed at preventing biological threats and exchanging data on dangerous diseases. The implementation of this important initiative is one of the priorities of the MFA at this stage of development.

Systematic work to attract foreign direct investment also stands out among the priority tasks of the Ministry of Foreign Affairs. This activity ensures the additional capital investments necessary for our economy, the transfer of advanced technologies and, most importantly, the creation of new jobs for the citizens of our country. Thanks, among other things, to the efforts of our diplomats, over the past years, about 380 billion US dollars of direct investment has been attracted to the economy of Kazakhstan. Of course, the diplomatic department, in close cooperation with other structures of the Government and national business, will continue to further improve the strategy and practice of working in this vital area for the country.

Guided by the idea and values ​​of the New Kazakhstan, the Foreign Ministry gives priority to the human dimension and considers the protection of the rights and interests of our citizens and national businesses abroad as a key task. Kazakh diplomacy is becoming more applied and focused on the specific needs of society and every citizen.

Unfortunately, the current international situation is characterized by a high degree of volatility and unpredictability. We are talking about such challenges and threats as a crisis of confidence and an increase in conflict between various international actors, the erosion of the fundamental principles of international law, the aggravation of the terrorist threat and the arms race, and the intensification of hybrid, trade, currency and cyber wars. New challenges require timely adaptation and adjustment of Kazakhstan’s foreign policy.

As you know, two years ago, by decree of the Head of State, the Foreign Policy Concept of the Republic of Kazakhstan for 2020-2030 was approved. The key provisions of the updated document are based on the principles of multi-vector, balance, pragmatism and protection of national interests. Kassym-Jomart Kemelevich Tokayev from the first days of his presidency clearly marked the continuity in the implementation of the foreign policy of the state. Our country continues to pursue a multi-vector diplomacy that has proven its effectiveness, ensuring a positive dynamic in the interaction of our country with all international partners. Thus, our foreign policy priorities remain unchanged.

Kazakhstan has been, is, and will be a reliable partner of the international community.