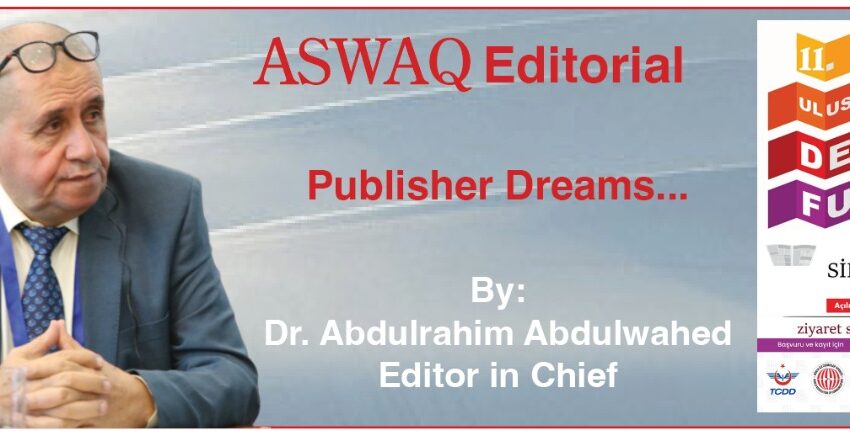 Aswaaq Magazine’s participation in the International Exhibition of Magazines in Istanbul, Turkey, between June 8-12, 2022 bears witness to the birth of a new stage of intellectual and cultural richness, considering Turkey as a main pillar interconnected with the pillars of the history of ancient and modern Arab culture.

The number of participating countries and magazines of all kinds in this 11th edition (400 magazines from 30 countries), in addition to the support of the Turkish Ministry of Culture and Tourism (TIKA), from the Turkish world, the Middle East, and Europe, reflects the importance of the event and the high expectations of achieving a qualitative leap in the publishing industry and enhancing spaces Culture and knowledge in different societies.

We are very hopeful, despite the dark clouds that surround our cultural societies and our ability to face challenges on the ground, that the exhibition will achieve its most important goals, most notably shedding light on the various cultural possibilities and situations in the participating countries, raising awareness among readers and people about the importance of reading, and increasing communication between peoples.

We hope that during the exhibition, the future of print publishing, including magazines, and its relationship to technological and digital developments will be discussed in an accelerated world, in which social media platforms almost dominate the entire publishing industry, not in the Arab and Islamic world, but in the rest of the countries of the globe.

We do not deviate from the truth and reality in which we live if we say that the publishing industry in the Arab and Islamic worlds is currently experiencing a difficult time, with a significant decrease in the percentage of readers of all age groups, and it is almost non-existent in some societies, which negatively affects the renaissance of nations and their ability to face challenges. The rapid and harsh life these days requires the official government stops and serious private institutions to help stop the bleeding of the decline of the publishing industry, which is the gateway to reading and readers in various types of cultural and intellectual sciences, where it is not hidden from anyone the negative impact and serious damage to the present and future of nations and peoples.
Therefore, this publisher must create the right and healthy atmosphere in order to work in an environment that helps him to fulfill his message with writers and thinkers and to present enlightening visions and ideas that fight ignorance and obscurantism, through the dissemination of culture and knowledge.
Here, we say that the appropriate positive conditions, materially, intellectually, culturally, and socially, are very important to promote and correct the course of the publishing industry in a positive, influential, and effective manner, which contributes to getting out of the dark tunnel experienced by the Arab reader and publisher alike.

The fact that we emphasize here is the prominent role of the publisher in promoting culture and its dissemination in the Arab region, and this does not mean ignoring his suffering and the difficult conditions he lives in in the continuity of his industry in spreading culture and thought, at a time when most of the markets of the Arab world have been affected as a result of economic conditions, wars and security repercussions. In many Arab countries, which had the most impact on the decline in the proportion of funds allocated to the purchase of books and publications in general, in addition to the financial problems of the role of the Publishers Association in most countries.

Thank you, intellectuals and creators.
Thank you to the team for managing, organizing, supervising, and supporting the International Magazine Fair in Istanbul.
Thank you to Turkish, Arab, and Muslim publishers everywhere.