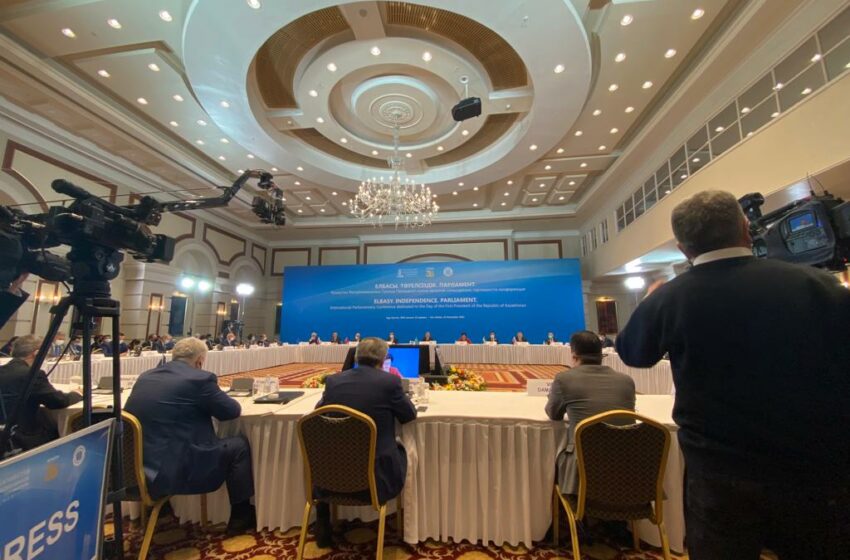 NUR-SULTAN – The Kazakh capital hosted the International Parliamentary Conference dedicated to the Day of the First President on Nov. 22, reported the press service of the Majilis.
Kazakhstan has been celebrating the First President’s Day annually on Dec.1 since 2012. On this day in 1991, Nursultan Nazarbayev was elected as the President of the Kazakh SSR. In 2011, the Kazakh Senate adopted a law introducing a new holiday to honor Nazarbayev’s contribution to the development of Kazakhstan.

In his opening remarks, Majilis Chairperson Nurlan Nigmatulin said that Nazarbayev’s initiatives contributed to the development of Kazakhstan. Kazakhstan has become a member of the global community, a leader in the region, a state with a strong economy and peaceful society due to the strategic course set by Nazarbayev.

“The First President made the welfare of people a priority. Due to this he proposed to focus on economic reforms. Today, Nazarbayev’s formula “economy first, then politics” has already become the rule of state crisis management,” said Nigmatulin.

The introduction of market mechanisms and the national currency, the creation of the National Fund, and other decisions also contributed to the successful implementation of the initiatives.

This year, the Kazakh Parliament celebrates its 25th anniversary. “The First President’s ideas, initiatives and decisions played and continue to play a key role in the development of parliamentarism. This approach strengthens the role and influence of the legislative branch as one of the important tasks of the formation and development of national statehood,” he added.

The Kazakh model of parliamentarism is defined by a bicameral system, the possibility of various ethnic groups to have representation in Parliament through the election of deputies to the Assemblies of the People of Kazakhstan, the multiparty system, and the redistribution of powers from the President to Parliament and government.

President Kassym-Jomart Tokayev continued Nazarbayev’s strategic course with his presidency. In addition, new mechanisms for protecting human rights and expansion of civic engagement and strengthening of public control have also been introduced.

The current political reforms also receive legislative support. The laws to improve the electoral legislation and the judicial system, legislative acts on political parties, peaceful meetings, and local self-government have already been adopted.

Nigmatulin also discussed strengthening cooperation with Deputy Chair of Parliament of Azerbaijan (Milli Mejlis) Adil Aliyev, Deputy Speaker of the Grand National Assembly of Turkey Süreyya Sadi Bilgiç, Deputy Speaker of the Legislative Chamber of the Oliy Majlis of Uzbekistan Odiljon Tojiev, and Chair of the Committee of the State Duma of Russia Leonid Kalashnikov, who also took part in the conference.
BY STAFF REPORT in NATION on Astana Times, 22NOVEMBER 2021