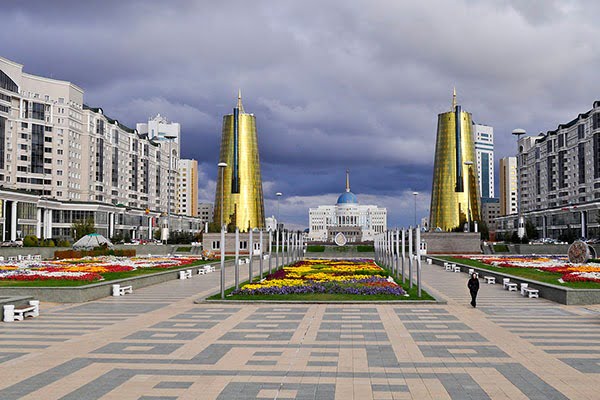 On his country’s celebrations of Capital Day, His Excellency Madiyar Menilbekov, Ambassador of Kazakhstan to the United Arab Emirates, said that“The Capital Day celebrations aim to celebrate the independence and culture of Kazakhstan, while Nur-Sultan is the new capital of Kazakhstan, and perhaps this is one of the newest capitals in, after it became the capital after Almaty, and it became A leading cultural and economic center of global importance from a simple, ordinary city.

H. E. add:” The first president, Nursultan Nazarbayev, based his decision to move the capital on a national study that took into account 32 main factors, including social and economic indicators, climate, landscape, seismic conditions, natural environment, transportation, infrastructure and means of construction and labor services. decisive in favor of Astana “Nur-Sultan” at that time in terms of its vast area, its location in the central part, its proximity to the main centers of the national economy and roads, its demographic potential, and advanced infrastructure. The Kazakh government was able to move the capital of the republic from the city of “Almaty”; Where it remained for nearly 70 years as the capital of the Republic in July 1998; At that time, it was called “Akmula”, which is the exact translation of “Aq Mol”, which in Kazakh language means “abundant white”.

Nur-Sultan is the second largest city in Kazakhstan and is located in the Akmola region, although it is administered separately from the region as a city with special capital status. The modern part of Nur-Sultan is a planned city similar to Brasilia in Brazil and Canberra in Australia. This part of Astana was planned by the famous Japanese architect Kisho Kurokawa.

“The old part of the city has changed a lot, the modern embankment of the Ishim River has acquired a beautiful view, new modern buildings have appeared on the main square near the Presidential Palace “Ak-Orda”, the 105-meter Baiterek Tower with a viewing platform appears at a level of 97 meters Wonderful, and this number (97) is not a coincidence. Rather, it is the year in which the capital was moved, on December 10, 1997, when Nazarbayev signed the important historic decision in the contemporary history of Kazakhstan, which is to transfer the capital of the republic from the border city of “Almaty” to the city of Almaty. “Astana”, which is currently called “Nur Sultan”, by a decision issued by President Kassym-Jomart Tokayev on March 23, 2019”, he said

The ambassador added, “Capital Day, also known as Nur-Sultan (Astana) Day is an official holiday in Kazakhstan and is celebrated on July 6, and “Capital Day” is celebrated on the occasion of the anniversary of the transfer of the capital of Kazakhstan from Almaty to Astana. Changing Astana’s name to Nursultan, in honor of veteran leader Nursultan Nazarbayev who resigned as president after 30 years as the country’s leader, explaining that when Kazakhstan was part of the Soviet Union, the country’s capital was Almaty, Kazakhstan’s largest city, and after the collapse of the Soviet Union, The intention was announced to return the capital to the historical capital of Kazakhstan, Akmola, and so on July 6, 1994, the capital of Kazakhstan was transferred from Almaty to Akmola.

The Kazakh ambassador explained add:’“Huge construction efforts have been made from the moment the city gained the status of the capital, and it has long been considered an architectural jewel of Kazakhstan and one of the most beautiful modern cities in all Central Asia. Polar, Business Center, Astana Tower, Nursultan Nazarbayev International Airport, Petrac Tower and Khan Shatyr Entertainment Center, while construction projects continue in full swing”.

stressed the great similarity between his country and the UAE in achieving renaissance and development in all fields, UAE went beyond the geographical borders of the to many regions of the world, including Kazakhstan.

On the occasion of his country’s celebration of the anniversary of the “Capital Day”, which falls today, Ambassador Minbekov added: “The civilizational and human distinction that is unique to the UAE has made it command the respect and appreciation of the countries and peoples of the world, pointing to the distinguished achievements that reflect the appreciation and respect of the international community, in light of the establishment of His Highness Sheikh Khalifa bin Zayed Al Nahyan and his Crown Prince, His Highness Sheikh Mohamed bin Zayed Al Nahyan, to continue the development process in the footsteps of Sheikh Zayed bin Sultan Al Nahyan, may his soul rest in peace.

The ambassador added: “The UAE is at the forefront of the global scene, and has become the focus of everyone’s attention, through its various achievements, which have since become a role model for many countries in the world and a broad gateway for exchanging experiences at the global level.”

His Excellency the ambassador said that the United Arab Emirates is considered a strategic depth for Kazakhstan in development, economics and humanity, which contributes to the awakening of the civilizational pillars and foundations of the entire country’s institutions.

The Kazakh ambassador explained that his country is benefiting and imitating the experiences of the UAE and its global experience in various fields, which in itself represents a qualitative addition to the development experiences in the entire Central Asian region, especially in light of the wide technological, knowledge and cultural developments in the arena.

The ambassador said that the civilized message of Kazakhstan and the Emirates presents a model capable of leading the world towards a better future, in which conditions for optimal use of natural and economic resources are achieved, in which all human beings coexist in an atmosphere of happiness, tolerance and peace, and in which everyone is secure in their future and the future of their children.

On his country’s celebrations of Capital Day, which falls today, His Excellency the Kazakh ambassador said: “The Capital Day celebrations aim to celebrate the independence and culture of Kazakhstan, while Nur-Sultan is the new capital of Kazakhstan, and perhaps this is one of the newest capitals in, after it became the capital after Almaty, and it became A leading cultural and economic center of global importance from a simple, ordinary city.