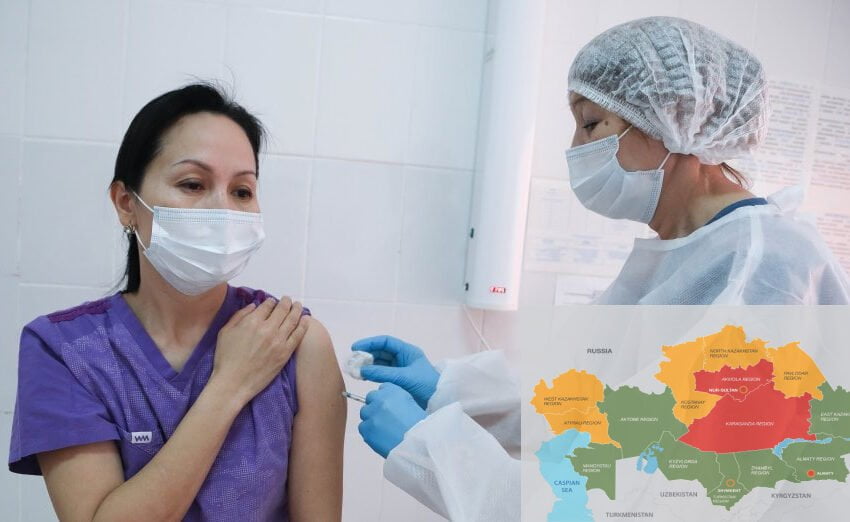 NUR-SULTAN – 1 million people in Kazakhstan have completed the full course of vaccination against COVID-19 by receiving two components of the vaccine, according to the data updated daily by the Kazakh Ministry of Healthcare. A little over 2 million people have received at least one dose of the vaccine.
 
Click on the picture to see the map. Photo credit: Serikzhan Kovlanbayev.
Almaty city, Almaty and the Karaganda regions lead in terms of the number of fully vaccinated people with 189,687 people, 124,836, and 100,935 respectively.
Kazakhstan began its mass vaccination campaign on Feb. 1 using Russia’s Sputnik V vaccine. Currently, Kazakhstan uses Russia’s Sputnik V, the locally produced QazVac, and China’s Sinopharm produced in the United Arab Emirates and named Hayat-Vax.
While locally produced QazVac is a cheaper option for Kazakhstan, the government does not plan to stop vaccination with other vaccines as well. “Due to the fact that QazVac requires special production conditions, we receive only 50,000 doses per month, and we need to vaccinate our citizens in large volumes faster. If we receive 50,000 doses, then it will take longer time until the plant is launched. We cannot stand still and our task is to launch the vaccination campaign as quickly as possible. Time is critical to us,” explained Kazakh Minister of Healthcare Alexey Tsoy at a press briefing on May 27.
President Kassym-Jomart Tokayev also held an online meeting with Director-General of the World Health Organization (WHO) Dr. Tedros Adhanom Ghebreyesus today, reported Akorda press. During the meeting, Dr. Tedros welcomed the development of the QazVac vaccine and announced Kazakhstan’s readiness from the WHO to consider its inclusion in the list of recommended vaccines.
Currently, the relevant Kazakh authorities have begun the process of obtaining approval for the domestic vaccine from the WHO.
Regarding the transition to post-pandemic life, the Minister of Healthcare announced that the mask regime will be lifted in Kazakhstan when at least 60 percent of the population is vaccinated across the country. “We have 2 million people vaccinated now. That is almost every 10th person. And the number of vaccinated people is growing daily. We say that when residents are vaccinated with the first component, the immunity from the virus increases by 80 percent,” said Tsoy.
Overall, there have been 381,907 registered cases of coronavirus infection since the first case was reported in Kazakhstan on March 13, 2020. The country is currently classified in the yellow zone concerning the epidemiological situation.
Four regions of Kazakhstan are in the red zone, including the Nur-Sultan, Almaty, Akmola and Karaganda regions.
West Kazakhstan, Atyrau, Kostanay, Pavlodar and North Kazakhstan regions are in the yellow zone.
Shymkent, Aktobe, Almaty, East Kazakhstan, Zhambyl, Kyzylorda, Mangistau and Turkestan regions are in the green zone.
While the epidemiological situation remains unstable in Nur-Sultan, there has been a dynamic decrease in the spread of the coronavirus in Almaty over the past week. The improvement of the situation in Almaty could be explained by the preventative measures taken by the city administration and by the growing portion of the immune population.
“There has been a development of 20-25 percent of the immune layer among the population, 15 percent of which is formed due to immunization, 5 percent – due to those who contracted the virus this year and 5 percent – due to those who became ill at the end of last year,” explained city’s chief sanitary doctor Zhandarbek Bekshin.