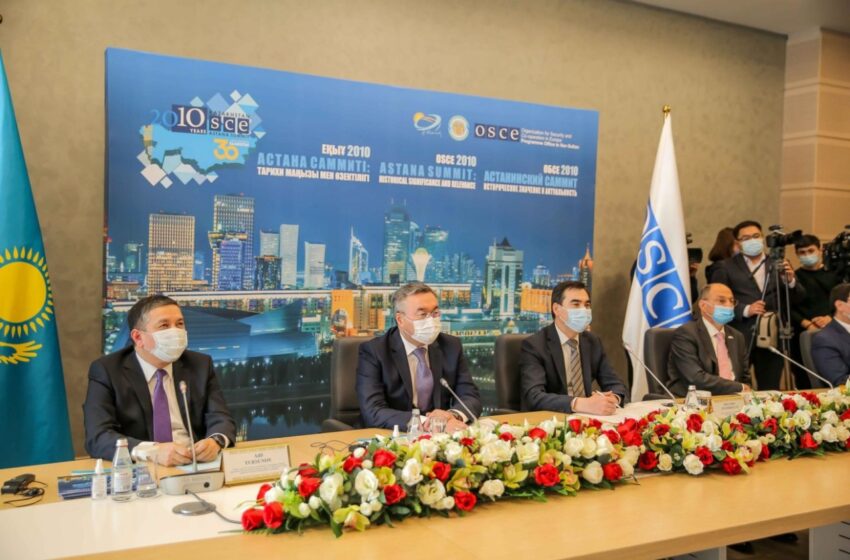 NUR-SULTAN, 22 Feb — OSCE (Organization for Security and Co-operation in Europe), called for facing the new threats and challenges that member states face in the current stage, strengthening traditional dialogue and expanding its agenda.

The members of OSCE, which includes 57 countries from Europe, Central Asia and North America, agreed during its conference in the Kazakh capital Nur-Sultan yesterday, to mark the tenth anniversary of the summit held in Astana in December 2010, to adopt solutions to the current security situation, with the aim of strengthening cooperative and comprehensive security for all.

A statement by the Kazakh Foreign Ministry said that the event was organized by the Library of the First President of the Republic of Kazakhstan, the leader of the nation, Nursultan Nazarbayev, the Ministry of Foreign Affairs of Kazakhstan and the Office of the Organization for Security and Cooperation in Europe Program in the Kazakh capital, Nur Sultan, in the presence of dignitaries from the member states.

Tileuberdi  said:”Kazakhstan was the first post-Soviet country to chair the organisation, a recognition of the increasing role of Kazakhstan in the international arena.

“Since its independence, Kazakhstan has built strategic partnerships with the world’s leading countries and authored many important initiatives, including the Conference on Interaction and Confidence-Building Measures in Asia (CICA)”. Tileuberdi add.

“The global nuclear movement, the fight against international terrorism, the development of inter-confessional dialogue and bringing the West and the Muslim world closer to each other. Regular meetings of the Congress of World leaders every three years in Nur-Sultan have become an important link in the dialogue between civilisations,” said the minister.

Tileuberdi suggested greater cooperation between the OSCE and CICA since they strive for common goals ““We are entering an era of disconnectedness given the rise of national egoism, economic protectionism, and the factor of power in international relations. The world community understands the need for a more sustainable system of international relations. Strengthening cooperation in the OSCE becomes ever important across these three dimensions, with a focus on the second one”.

The 30th anniversary of the closure of the Semipalatinsk test site is yet another important milestone not only for Kazakhstan, but the world.

“In 1991, the world’s largest test site with an area equal to that of Italy was closed. The world’s fourth largest arsenal was abandoned,” he added.

The current global situation exacerbated by the ongoing coronavirus pandemic reiterates the relevance of the Astana declaration that reaffirmed a commitment to a “common and indivisible Euro-Atlantic and Eurasian security community stretching from Vancouver to Vladivostok.”

Through dialogue, inclusion and respect for agreed principles, the OSCE can make a real difference, said Chairperson-in-Office and Swedish Minister for Foreign Affairs Ann Linde.

She said in her video address to the conference :“The Astana declaration is one of the prime examples of that and shows why our joint commitment remains so important’.

She noted the importance of the summit hosted by the Kazakh capital, the first in over a decade and still the last to gather the OSCE member states.

“To remind ourselves that all OSCE principles and commitments without exception apply equally to each participating state and that we are all accountable for their full implementation. We need to continuously highlight why and how these commitments remain relevant and important today. This conference is an excellent example of how we can do that,” said Linde.

Security can only be achieved when there is equality between women and men, respect for democratic principles and the fulfilment of human rights, said Linde also elaborating on her country’s priorities as the organisation’s chair.

“Without genuine political will from those involved in conflicts, progress is, of course, hard to achieve. This is why defending European security order and its fundamental principle is the priority for the Swedish chairperson-ship in the OSCE. It is essential that we build our organisation on principles and commitments agreed by all in order to achieve security for all. Two other priorities for our chairperson-ship are to strengthen the comprehensive concept of security and contribute to solving the conflicts in the regions in accordance with the law. Our priorities are interlinked,” she said.

OSCE Secretary General Helge Schmid also spoke about Kazakhstan’s involvement with the OSCE”“Kazakhstan and OSCE are closely connected in many ways. Since its membership in 1992, Kazakhstan has become one of the most active OSCE participating states taking initiatives and contributing to our security dialogue. A champion of the economic and environmental dimension Kazakhstan continues to provide significant impulses on many important topics, including connectivity and sustainable development”.

Kazakhstan’s good relations with other countries, both in the region and beyond, also play a crucial role in achieving the organisation’s goals, particularly amid the current geopolitical situation.

“Chairing of OSCE in 2010 and the Astana Summit was a high watermark in Kazakhstan’s involvement with the OSCE, taking on this important responsibility was a service to the organisation, but also furnished Kazakhstan’s reputation as a country with strong aspirations to act as a bridge between Europe and Asia. This bridge building function is even more important today,” said Schmid.

“This was the last time to date and the only time in the century that the OSCE participating states met at the highest level. (…) Even a decade ago, it was clear to me and all participants at this historic summit that for this vision to become reality, we would need to strengthen respect for OSCE fundamental principles and commitments, and step up our efforts to find common ground,” said Schmid.