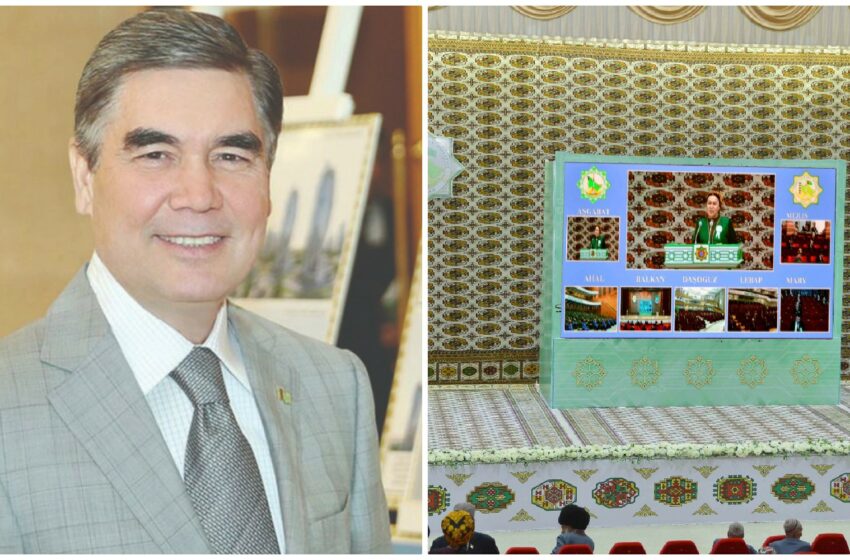 The successive session of the People’s Council of Turkmenistan chaired by the President of Turkmenistan Gurbanguly Berdimuhamedov was attended by the Chairperson of Mejlis (Parliament), Deputy Chairmen of the Cabinet of Ministers, heads of the ministries and profile agencies, members of public organizations, elders, representatives of various sectors, students and representatives of the mass media.

Being the highest representative body of the public authority, the People’s Council (Halk Maslahaty) provides for the application of the experience of Turkmen people in the area of state formation accumulated during the centuries-old history and participation of extensive groups of population in the adoption of significant public and political resolutions leading consequently towards realizing conceptual ideas and unity.

This is based on such noble traditions of ancestors as holding nation-wide assemblies, during which the authorized representatives of communities made decisions on the most vital political, economic and military issues while generally accepted democratic principles were observed.
The successive session of the People’ Council of Turkmenistan had a rich agenda. During the meeting, the key vectors of successful implementation of historic and long-term programs in the new development period of the independent and permanently neutral Turkmenistan, as well as the subjects related to the socio-economic growth of the state in 2021 were considered.

Besides, the constitutional reforms aimed at the development of work of the representative bodies in the area of legislative power were regarded. The corresponding documents of the People’s Council were adopted.
The historic address of the President of Turkmenistan Gurbanguly Berdimuhamedov took place.

The Head of State noted that in the result of the work done, the social conditions corresponding to the world standards are created for the population. These achievements were attained due to the friendship, hard work, and high spirituality of the people.

During the successive session of the People’s Council of Turkmenistan, it was also comprehensively spoken about the constitutional reforms which serve as a proof of adherence to democratic norms and international cooperation conditioned by the achievements of the society.

The implementation of constitutional reforms is aimed at ensuring a prosperous and happy life for the Turkmen people and is one of the important steps towards further democratization of the state.

Starting from the first days of its sovereign development, Turkmenistan proclaimed the neutrality of the state, taking into account national and international interests in world politics, and strictly adhering to the principles of good neighborliness, mutual respect, and equality, implements a foreign policy aimed at maintaining global peace, security, and prosperity.
The need to strengthen the multilateral cooperation of Turkmenistan with such authoritative international organizations as the United Nations, the European Union, the Commonwealth of Independent States, the Organization for Security and Cooperation in Europe, the Non-Aligned Movement, the Organization of Islamic Cooperation was especially noted. Strengthening ties with the countries of Asia and the Pacific region, states of the Near and Middle East, the European and American continents were also noted among the priority tasks of the country.
The President also stressed the importance of strategic cooperation between Turkmenistan and the United Nations. In this context, it was noted that the country’s initiatives put forward in the field of water, energy and transport diplomacy are supported by the world community and contribute to strengthening the international authority of Turkmenistan. The head of the Turkmen state stated that the proclamation, on the initiative of Turkmenistan, of 2021 as the International Year of Peace and Trust, in accordance with the Resolution of the United Nations General Assembly, in turn, demonstrates to the whole world the country’s efforts aimed at establishing universal peace and friendship, and this, became another historic milestone in strengthening the importance of the neutral status of the state.
President Gurbanguly Berdimuhamedov noted that the acquisition of the observer status in the World Trade Organization by Turkmenistan will ensure the coordinated development of the national economy, strengthening its position in foreign trade relations, intensifying multilateral cooperation, including actively attracting foreign capital.
In view of the global situation, ensuring environmental safety in the Aral Sea basin also became a separate topic on the agenda of the meeting.
The President of Turkmenistan also stated that the spread in 2020 of a particularly dangerous disease – a new type of coronavirus, adversely affected the economies of the countries of the world, and, despite the ongoing difficult socio-economic situation on a global scale, the country’s economy maintained its stable development.
In Turkmenistan, more than 70 percent of the state budget is directed to the social sphere. In this context, in his speech, President of Turkmenistan Gurbanguly Berdimuhamedov noted that as part of the implementation of the “Program of socio-economic development of the country for 2019-2025”, a huge work is being done in all areas of the national economy. In particular, work is underway to comprehensively develop the national education system, increase the range of import-substituting products, expand the indicator of national energy products in the world market, widely introduce innovative technologies in all spheres of the economy, increase the export of textile goods, and create competitive macro structural transport and logistics systems. In this direction, other significant tasks have been identified for the development of priority sectors of the economy.