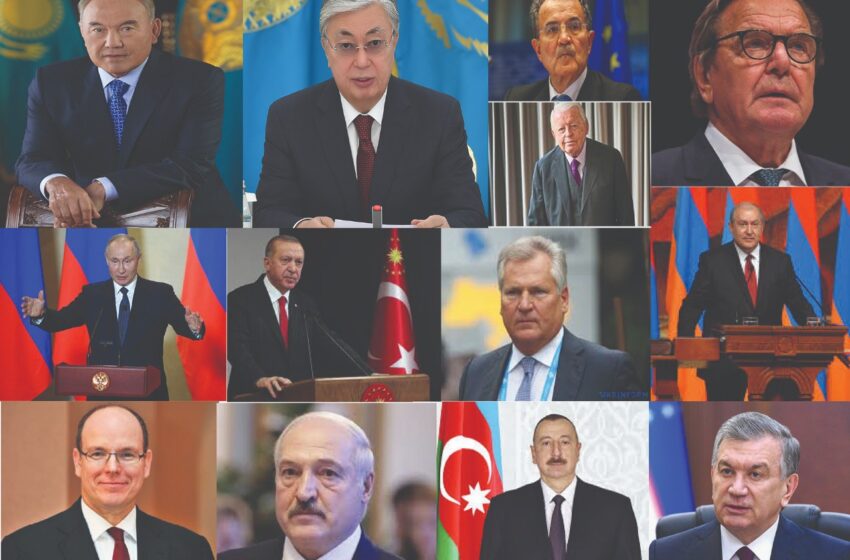 Testimonies of the Most Prominent Global Leaders

The First President of the Republic of Kazakhstan, Nursultan Nazarbayev, turned the dreams of his people into reality, and the achievements that were achieved expanded to the economic, political, social and development sectors, despite the crises and social, economic and political problems that Kazakhstan suffered during its independence in 1991, while many expected the collapse of this country under The harsh conditions inherited from the Soviet Union.

Nazarbayev celebrates his 80th birthday. A world leader from the provincial outskirts of the former Soviet Union turned his country into a modern state of the 21st century and makes a great contribution to global and regional politics.

Nazarbayev founded the new capital of the country.Today, this city is amazing with its skyscrapers and incredible architecture.

Different styles coexist here, talentedly embodied by architects from Europe and the Middle East, Russia and East Asia. The population of the capital increased by more than 3 times, quickly reaching over 1 million people.

Nursultan Nazarbayev approved the “Kazakhstan – 2050” Strategy. It sets an ambitious goal: the country should become one of the 30 most developed countries in the world.

Recognition of the merits of the First President of Kazakhstan, who voluntarily resigned as head of state in March 2019, was the decision of the new president Kassym-Jomart Tokayev and the parliament to name the capital after him. Now it is called Nur-Sultan.

A 78-story building is being built in Nur Sultan: the tallest in Central Asia. It bears the very symbolic name of Abu Dhabi – Plaza. From its construction sites another project of Nursultan Nazarbayev that is International Financial Center Astana overlooks. In this complex, the World Exhibition EXPO-2017 was held, which received about 4 million tourists from all over the world.

Today, offices of over 170 companies from 18 countries are located here, and an international arbitration court operates. Nursultan Nazarbayev was able to attract more than $ 320 billion of foreign investment into the national economy. This is an unrivaled fact for countries that arose on the ruins of the former USSR and Eastern Europe.

The issue of nuclear disarmament has always occupied an important place in the politics of Nursultan Nazarbayev. The problem of the Soviet nuclear test site on the land of his native Kazakhstan worried him already at the time when he was working in Karaganda as a simple steelmaker. The echoes of the underground explosions felt like small earthquakes in those places hundreds of kilometers from their epicenters.

The area of ​​the Semipalatinsk test site was one and a half times the territory of such a country as Lebanon. More than 1.5 million Kazakhstanis suffered, children were born with anomalies and diseases.

In the early 90s of the last century, Libyan leader Muammar Gaddafi addressed Nursultan Nazarbayev. He proposed that Kazakhstan retain this deadly weapon, becoming the first nuclear power in the Muslim world. However, the first President of Kazakhstan rejected this idea, choosing the path of voluntary renunciation of nuclear weapons.

On August 29, 1990, he issued a Decree to close the Semipalatinsk Nuclear Test Site. This date is now proclaimed as World Nuclear Weapon Test Day.

Kazakhstan has become the venue for important rounds of multilateral negotiations on issues around Iran’s nuclear program. An agreement was concluded with the IAEA to establish an international nuclear fuel bank in Kazakhstan. The first President of Kazakhstan is rightly considered the leader of the global anti-nuclear movement.

Here are Testimonies of the Most Prominent Global Leaders:

President of the Russian Federation Vladimir Putin: To be honest, I was always pleased and surprised, because Nursultan Abishevich had made a brilliant career even in Soviet times. Despite the fact that he has a Soviet past, he is a man who is always striving for the future. He has an amazing quality to surround himself with very efficient, effective people and young people and is never afraid to put strong people next to him. This is a hallmark of a strong leader. Such a wise, active, energized, talented head, and leader is Nursultan Abishevich.

Romano Prodi, Chairman of the Council of Ministers of Italy

I am a very old friend from Kazakhstan. I first visited your country in 1998. The second time – in 2007. Both trips – on an official visit as Prime Minister of Italy. What was the difference in my impressions? On my second trip, I ended up in a completely different environment and in a different country.

Franz Wranitzky, Chancellor of the Republic of Austria (1986 – 1997): The chairmanship of Kazakhstan in the OSCE is one of the important examples of the success of Mr. Nazarbayev. This is a good signal, a good contribution to security and cooperation in Europe. Therefore, it was a successful year not only for Kazakhstan but also for the OSCE.

For the first time in world history, at the initiative of Nursultan Nazarbayev, the leaders of 16 Asian states gathered in Almaty in May 2003. The Conference on Interaction and Confidence-Building Measures in Asia now coordinates many security issues between 30 states, including China and Russia, India and Pakistan and Saudi Arabia.

Recep Tayyip Erdogan, President of the Republic of Turkey: Nazarbayev is also the thought founder of the Conference on Interaction and Confidence-Building Measures in Asia (CICA). Elbasy laid stress on the creation of the Turkic Council, which contributes to the development of a wide range of cooperation between our fraternal nations.

Franz Vranitzky, Chancellor of the Republic of Austria (1986 – 1997): I think that one of the characteristics of the statesman Nazarbayev is that he is open to many other ideas and political standpoints. He always sees the basic idea of a country, state, political contacts, political cooperation, as the basis of his contribution to international peace and international stability.

Kassym-Jomart Tokayev, President of Kazakhstan: In a meeting with Clinton in 1997, you know that it was a very difficult time for Clinton. He had a big scandal over the connection with Lewinsky. It was really visible, he was very powdered and worried. This powder literally poured into a mug from which he sipped all the time. Nursultan Abishevich rather relaxedly asked: “What are you drinking?”

To which he: “You know, they kill me every day in connection with this scandal. I’m drinking sedatives now. ” That is, by this, Nursultan Abishevich seemed to express his disposition towards him as much as could be done while in the White House. It seems to me that Clinton appreciated everything, he was in Almaty after his retirement.

Alexander Kwasniewski, President of the Republic of Poland (1995-2005): The first time I visited Kazakhstan a long time ago, as a student in the mid of the ’70s. One of the points of the trip was Almaty. My next visit was to independent Kazakhstan, official visit as the President in 1997 and the host side was President Nazarbayev. Then I had so many visits to Kazakhstan, that it is difficult for me to say how many.

Albert II, Sovereign Prince of Monaco: He came to Monaco during his tenure, he was able to see firsthand how Monaco developed. He was really interested in that. We were able to do this in a sustainable way. There is a big difference in the size of countries. Kazakhstan is a very large country. We are a very small country, very urbanized, and he really regarded Monaco as an equal partner, regardless of the size, capabilities of our country.

Alexander Lukashenko, President of Belarus: His distinguishing feature, in Nursultan, you know which one? He selflessly loves his Kazakhstan. He is blinkered at times. He does not see anything when somewhere there is a dispute that affects the interests of Kazakhstan. For him, Kazakhstan is everything.

President of the Republic of Uzbekistan Shavkat: The uniqueness of Nursultan Abishevich is that he is a very progressive person. He is very committed to reform. He is generally a reformer in his life. Here you can see what Kazakhstan has achieved over the years of Independence.

President of the Republic of Azerbaijan Ilham Aliyev: I am always very pleased to communicate with Nursultan Abishevich. I have great respect for him, he is our wise man. I have visited Kazakhstan many times and on his turn, Nursultan Abishevich has repeatedly visited Azerbaijan. Склейка. They love him very much in Azerbaijan precisely because we see a real friend in him.

Gerhard Shroder, Chancellor of Germany (1998-2005): If you recall, that period was very turbulent due to the terrorist attacks of September 11 in New York City. During the meeting with President Nazarbayev, we very quickly agreed that Kazakhstan and Germany had a common task to counter the threat of terrorism. It should be noted that President Nazarbayev is also known for his valuable contribution to international efforts to combat terrorism.

Armen Sargsyan, the President of the Republic of Armenia: Nursultan Abishevich is a unique political leader. The leader who made this absolute transfer from one completely different state to a totally new, wholly new one: Independent Kazakhstan. I know his enormous contribution in different areas of life in Kazakhstan, the Kazakh and Kazakhstani people.