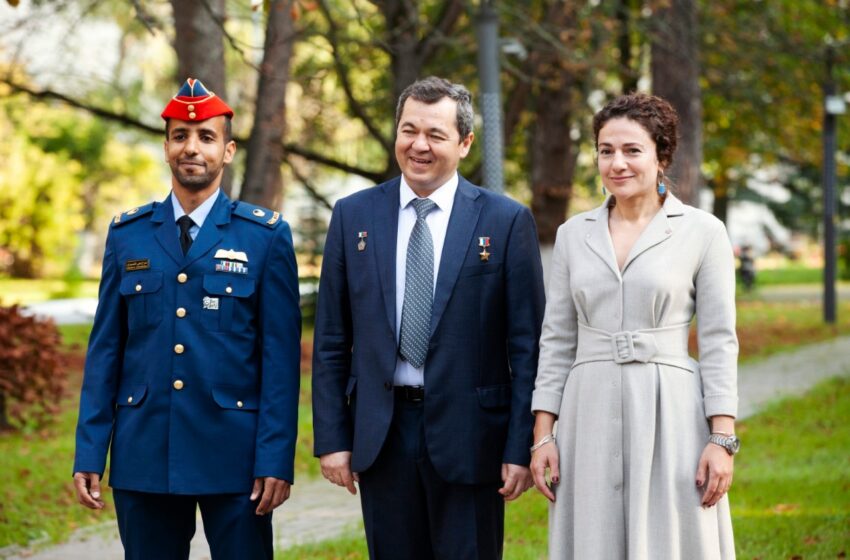 They will be launching to the ISS on September 25 at 5.56pm, UAE time.-Wam
The crew will remain under quarantine at the Cosmonaut Hotel to ensure they don’t get exposed to harmful bacteria.
With just 15 days left for the first Emirati to blast off to space, the Dubai Crown Prince has personally called him and his back-up to convey the UAE’s pride in their mission.

The main and the back up crews for the September 25 mission to the International Space Station (@Space_Station) have landed in Baikonur, Kazakhstan where they will be placed under quarantine for two weeks. pic.twitter.com/CGaGyhNTnW

During the call, Sheikh Hamdan bin Mohammed bin Rashid Al Maktoum said: “This historic voyage to the ISS will open the way for a new scientific revolution in the Arab world.”

The Dubai Crown Prince tweeted photos of the farewell ceremony organised for the two astronauts as they left Moscow on Tuesday, September 10, for the city of Baikonur in Kazakhstan. They completed their training at the Gagarin Research and Test Cosmonaut Training Centre.

The main and the backup crews during the farewell ceremony at Yuri Gagarin Cosmonaut Center in the presence of H.E. Hamad Obaid AlMansoori, Chairman of MBRSC, and H.E. Yousuf Hamad AlShaibani, Director General of @MBRSpaceCentre before heading to Baikonur. pic.twitter.com/NFrYuEpPN3

The crew will remain under quarantine at the Cosmonaut Hotel to ensure they don’t get exposed to harmful bacteria. They will leave their hotel next on September 24 to hold a Press conference, but from behind a glass wall.

The next day – the launching day – they will leave their hotel several hours prior to liftoff time for a final public appearance, wearing their suits at another location, and then, they will be taken to the launch site.

They will be launching to the ISS on September 25 at 5.56pm, UAE time.

Al Mansoori will conduct 16 scientific experiments in cooperation with international space agencies, including the Russian Roscosmos and the European Space Agency (ESA). The scientific mission includes experiments proposed by 16 schools in the UAE in a microgravity environment aboard the ISS. The results will then be compared with those done on earth.

What happens during the isolation period?

The FBMA is responsible for preventing germs from entering their ground and space facilities, in addition to implementing a comprehensive sterilisation against microbes

The facilities and tools they use are subject to frequent sterilisation, including accommodation, buses and training sites

The UAE astronaut and his crew are going to be the last astronauts to lift off from the same launch pad that was used to send the world’s first man, Yuri Gagarin, into space in 1961.

The historic site is popularly known as ‘Site 1’ or ‘Gagarin’s Launch Pad’. It was also used in launching the world’s first satellite, Sputnik, in 1957, as well as the world’s first woman astronaut Valentina Tereshkova a few years later.

“We will be launching from the Yuri Gagarin launch pad and this will be the last launch from that pad. It’s really amazing how fate is working out. The Arabic meaning of my name is the last arrow and I’ll be on the last rocket that will be launching from that pad. I’m honoured to conduct this mission,” Al Mansoori had told Khaleej Times during a one-on-one interview in Star City, Russia.

After the last mission on Gagarin’s Launch Pad, all future crew launches will take place from Site 31, which can support Russia’s new Soyuz 2 rocket.

Al Mansoori and his crew are bidding farewell to Russia as they departed for Baikonur, Kazakhstan, on Tuesday. They will take part in pre-launch ceremonies that have been a long-run tradition at the Russian space agency, Roscosmos.

Some of these ceremonies include raising their country’s flag two days after reaching Baikonur, taking part in a sports game, and planting trees – all traditions that have been followed since the days of Gagarin.