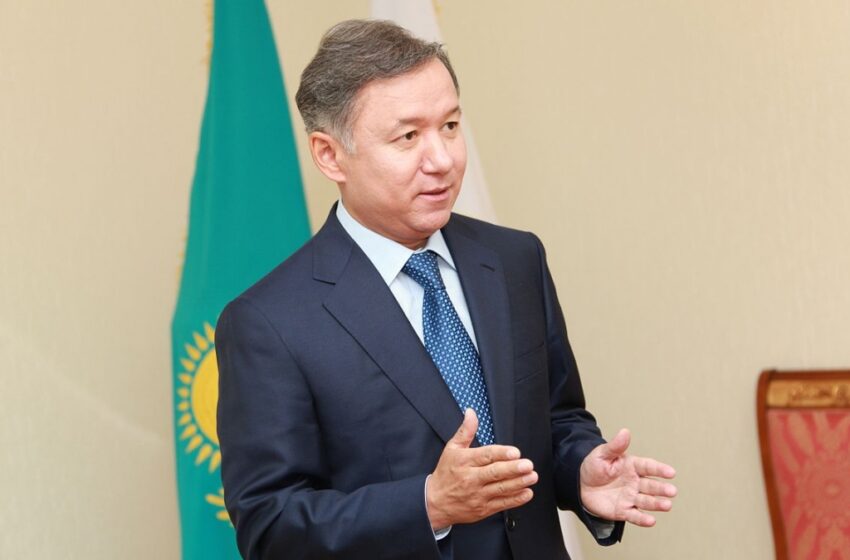 A major event important not only for Kazakhstan but for all European and Asian countries will take place in our capital this autumn. On 23-24 September, the city of Nur-Sultan will host the Fourth Meeting of Speakers of the Eurasian Countries’ Parliaments titled “Greater Eurasia: Dialogue. Trust. Partnership.”

The topic proposed by Kazakhstan reflects the course towards the development and strengthening of interaction between the countries of Europe and Asia to ensure safe and sustainable development of Eurasia.

Eurasia is a pillar of the modern world. It is the largest continent, covering 65% of the world’s population, 75% of energy resources and 40% of global GDP.

At the same time, the diversity of economic systems, the huge imbalance in the level of development between parts of the continent, as well as the increasing trend towards regionalisation, prevent us from describing Eurasia as a single economic entity.

The current level of trade and economic interdependence requires closer interaction from everyone and consideration for the interests of the Eurasian countries.

Kazakhstan’s main message is to position Eurasia as a platform for testing a fundamentally new partnership model based on a joint, collective solution of the emerging disagreements between certain states, as well as countering common challenges.

Subsequently, the strategic initiative to build partnerships across the Eurasian continent, proposed by Nursultan Nazarbayev, was enshrined in the Astana Declaration of the Organisation for Security and Cooperation in Europe (OSCE) in 2010. The OSCE Participating States declared their commitment to the principle of a common and indivisible Euro-Atlantic and Eurasian community.

In 2015, in his statement from the rostrum of the UN General Assembly, the First President of Kazakhstan proposed the idea of creating a Greater Eurasia, which means bringing together the Eurasian Economic Union, the Silk Road Economic Belt and the European Union in a single integration project.

The unprecedented project of Greater Eurasia calls for the harmonization of the efforts of these entities and initiatives, including the liberalization of trade relations between their participants, joint development of transport corridors, diversification of energy routes, expansion of investment co-operation and other issues of economic interaction.

In April 2019, at the Second Belt and Road Forum for International Cooperation in Beijing, Nursultan Nazarbayev invited the world community to create a new geopolitical reality of 3D, which proposes the establishment of the Three Dialogues.

The first dialogue is needed at the global level between the United States, Russia, China and the European Union.

The second dialogue is needed at the level of Eurasia in order to bring together the capabilities of the Conference on Interaction and Confidence Building Measures in Asia and the Organisation for Security and Cooperation in Europe.

The third dialogue would be a systemic economic dialogue between the Eurasian Economic Union, the European Union, the Shanghai Cooperation Organisation and the Association of Southeast Asian Nations. The development of economic cooperation in such a format can, firstly, give a powerful impetus to the development of our countries, the growth of economies and the improvement of the well-being of citizens. Secondly, it can create new sources of diversification, strengthening competitiveness, improving the business climate and increasing the investment attractiveness of states. Thirdly, it can transform into a call for the enhancement of the global role of Greater Eurasia.

The launch of these dialogues is in the common interest of all European and Asian countries, and will contribute to the formation of interconnections for a sustainable future of a united Eurasia.

Therefore, the main objective of the Fourth Meeting of Speakers of the Eurasian Countries’ Parliaments is to establish a direct multilateral dialogue between the heads of legislative bodies of Europe and Asia, as well as heads of international and inter-parliamentary organisations to further deepen and expand cooperation in the Eurasian space.

The role of parliaments in identifying key areas of political and economic development of states will serve as a strong foundation for finding common points of interaction and mutually acceptable solutions at the regional and continental levels.

The main elements of the agenda include:

Firstly, coordination of the basic principles of economic development of the Eurasian space.

The key objective is the full realisation of the integration potential of Greater Eurasia, including through the development of transport and transit infrastructure, increasing mutual trade, expanding industrial and innovative cooperation – the arrival of a “moment of Eurasia,” a unique combination of international political and economic circumstances.

Secondly, discussion of the algorithm of a dialogue through cultural and humanitarian ties and the development of inter-parliamentary interaction in the Eurasian space.

If we look at the history of the event, the initiators of this forum are the State Duma of the Federal Assembly of Russia and the National Assembly of Korea. The previous three meetings were held in Moscow (2016), Seoul (2017) and Antalya (2018) and became an effective platform for discussing topical issues of cooperation in the interests of sustainable development and well-being of the Eurasian countries.

Now, the international parliamentary event of such a level will be held in Kazakhstan for the first time.

The heads of parliaments from 84 European and Asian countries and the heads of 16 international and inter-parliamentary organisations have been invited to the forum in Nur-Sultan.

The participation of influential parliamentarians from Europe and Asia in the forum will provide an opportunity to exchange views on topical issues of development, as well as find a vision and practical recipes for moving towards a viable win-win model for Eurasia.

The outcome of the discussion, we hope, will be the adoption of the final document, the Joint Statement of the Speakers, which will reflect the views of parliamentarians on the further development of the Eurasian continent on the way to our common future.

Ultimately, the upcoming forum will contribute to the strengthening of comprehensive interaction and cooperation in Eurasia, and the development of inter-parliamentary contacts and partnership.

(The views are personal. The author is Chairman of the Majilis of the Parliament of Kazakhstan)