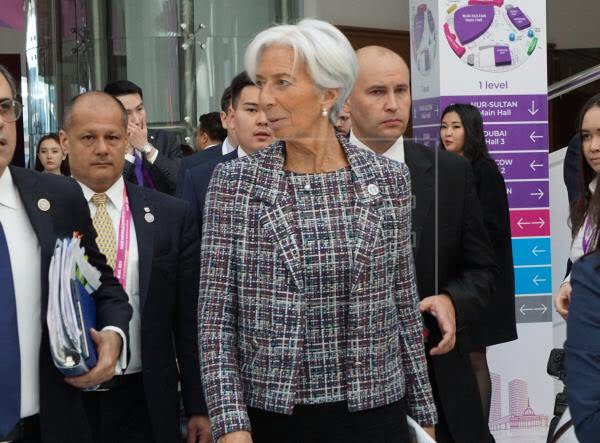 Nur-Sultan: A well-known trade war of the US and China was amongst the issues that were dealt with, in Asthma Economic Forum (AES) 2019. The two-day AEF 2019, which started today, has 5,492 registered delegates from 74 countries, made up of experts, politicians, business people and scientists.

It’s not only these two countries who will bear the brunt of this trade war but the direct and indirect impact and the extent that it undermines confidence and certainty will impact all.

International Monetary Fund (IMF) managing director and chairman Christine Lagarde reiterated calls for the trade dispute between the United States (US) and China to be resolved in a satisfactory manner.

“I don’t have any specific numbers concerning this region or a particular country in the region but suffice to say that any trade war is going to affect all those who participate and all those who do not participate,“ she said when asked on how trade war between the US and China will impact Central Asia.

“Nobody wins a trade war in our view we all have to lose. Certainly, we hope the tensions that exist can be resolved in a satisfactory manner that would provide reciprocated benefits to all parties and will set up clearly the framework in which trade is (the) main engine for growth can continue and prosper”, she said.

“To the extent that this trade tension, if likely to last, which we hope it will not. It will lead economic factors, particularly from the private sector to re-visit and re-organise their supply chain and how they run their business”, she added.

Apart from the trade war, the slowdown of Global GDP was also discussed. According to the IMF Managing Director, 70 per cent of the global economy is expected to experience a slowdown in 2019. While there was about 75 per cent of the world accelerating growth pace last year 2018, unfortunately, in 2019, we see about 70% of global GDP slowing down that growth momentum.

“So, I am not suggesting that there is a recession in the wings, but it is certainly slowing down as compared with last year – from 3.6% last year, we forecast 3.3% global growth to hopefully go back to 3.6% next year, which, however, is predicated on no additional financial tightening and, hopefully, an alleviation of what we regard as major risks to growth at the moment, which are the international tensions that we see in abundance between major players in the world”, Christine Lagarde clarified.

“We need to increase growth to a higher plane, but we need to stride carefully yet confidently on that path. And, to that end, we believe that good domestic policies are needed, that increased economic diversification is required, and that international cooperation is at play,” she added.

Besides Lagarde, the event also has the participation of Han Zheng, Vice-Premier of the State Council of China, Armen Sarkissian, President of Armenia, Risto Siilasmaa, chairman of the board of directors of Nokia Corporation, and Paul Romer, chief economist of the World Bank (2016-2018) and Nobel Prize in Economics 2018 winner.