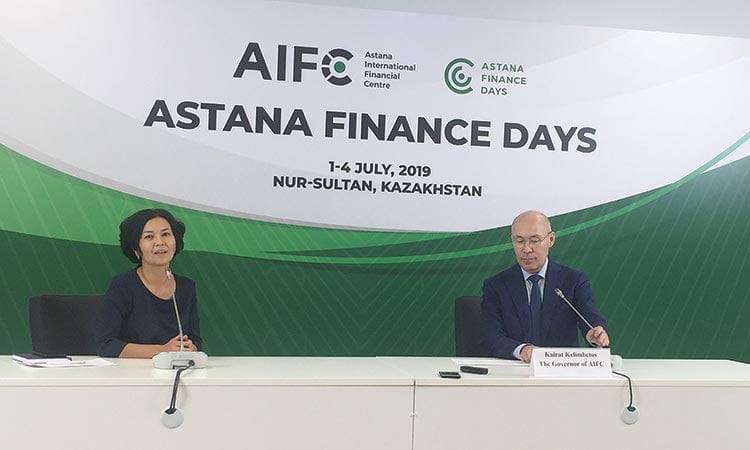 The bilateral trade ties between Kazakhstan and the UAE is marching ahead and is on a solid growth trajectory as our country bids to become a regional financial centre and Fintech hub for Central Asia is deeply influenced by Dubai.

“The UAE has shown to the world how to successfully diversify the economy and attract experts in various government entities and regulatory bodies. Dubai is a great example to follow as we move ahead with efforts to usher in changes,” he added.

He mentioned that his country has already announced its active participation in Dubai Expo 2020, adding that he is also interested to discuss with the UAE authorities to host different events during the mega event in order to promote the AIFC on a global level.

Speaking on the sidelines of the Astana Financial Forum in the Kazakh capital, Nur Sultan, Kelimbetov said: “At the time of incorporation, we have benefited from the experience of the DIFC and the Abu Dhabi International Financial Market in the application of global best practices.

He pointed out that the DIFC and the National Bank of Kazakhstan provide support to Kazakh companies seeking to establish an international presence.

“The DIFC is our key partner in the Gulf region, and we view it as a hub for it. We have capitalised on the establishment of the Financial Court, which was launched a few days ago at Nur Sultan. We are also planning to issue Islamic Bonds (Sukuk), and are also working on dual listings with Nasdaq Dubai, but it is not yet finalised.

“We are looking forward to make most of the DIFC’s expertise as one of the most influential players in the international arena, who have been competing with world renowned financial centres such as London, New York, Hong Kong and Singapore.”

“In Kazakhstan, we have excellent economic fundamentals that allow us to achieve a high profile in the financial industry,” Kelimpetov said. “We have strong foreign reserves in our country, which helps to cope with any financial crises, while at the same time the ability of the Astana Center to attract billions of investments to the economy. His country, based on the available possibilities and the strong perception that competition for investors is increasing every day. “

In the coming 10 years, Kazakhstan will witness a digital revolution in its financial centre services and achieve record financial achievements in the coming years by reaching the top ten Asian financial centres, especially if we know that Kazakhstan is ranked fifth in the destination of Islamic investment among 57 member countries, Kelimbetov said. “Kazakhstan is on track to create a qualitative leap and a real revolution in the provision of financial services during the ten years not only in Kazakhstan but also in the CIS region. “

He explained that about 1,800 job positions will be established within 10 years, and allocating 2,000 to 3,000 staff from Kazakh financiers, lawyers, consultants and other specialists.

Kelimbetov stressed that the Islamic economy in general and Islamic finance in particular has become a vital extension of the global economy. He pointed out that the UAE and Bahrain have set an example in its strategy to develop regulatory frameworks for the Shari’a-compliant sectors in line with the requirements of sustainable development.

“We are constantly reaching out to financial officials in Bahrain to learn about the latest developments in the Islamic banking industry. We also seek to strengthen joint Islamic finance cooperation between the Astana Financial Center and BIBF.

The financial institutions of Astana Financial Center include Al Hilal Bank based in Abu Dhabi.

Kelimbetov explained that the Astana International Financial Center aims to become a centre for Islamic finance in Central Asia and the Eurasian Economic Community, with a population of more than 200 million people.

“Kazakhstan is planning to develop the Islamic finance industry to create alternative sources of financing for state and municipal projects, as well as private projects. The centre is looking into several potential areas to be developed, including Islamic finance, which currently accounts for less than 1 per cent of total Banking assets in the country. Other areas include the capital market, financial technology, asset management and private wealth management. “

“Islamic finance currently accounts for less than 1 per cent of its total banking assets, with a growth plan of 10 per cent by 2025. It is a big leap, and therefore the plan must also have a quantum leap to push it forward,” said the Kazakh banker.

The Astana Financial Center has a special legal system that does not depend on the judicial system in Kazakhstan and was established in accordance with the principles of British law. English was adopted as the only language of interaction within the Center. In addition, the list of benefits enjoyed by investors within the centre is long, with tax preferences up to 50 years, exemption from personal income tax and corporate income tax until January 1, 2066.