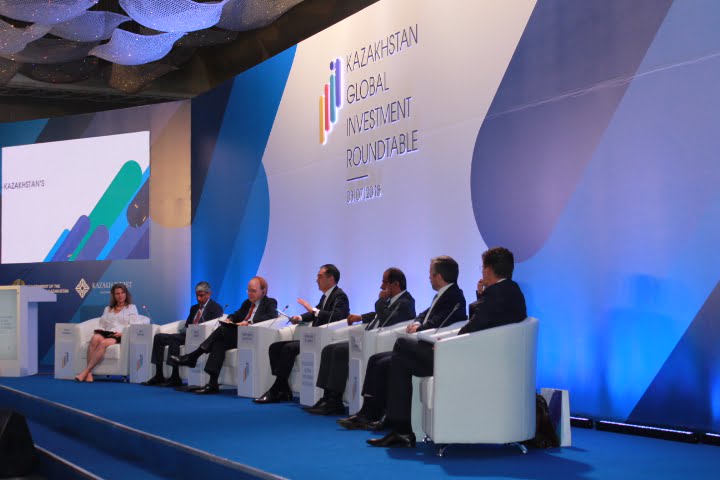 ASTANA: Kazakhstan Global Investment Roundtable, Modernization 3.0 (KGIR M-3) was held in Astana in which the participants and investors around the globe participated. Prime Minister of Kazakhstan Bakytzhan Sagintayev said that Kazakhstan is a country for your business to settle and invest. He said, “This is our second meeting, and we can already discuss what we have accomplished so far, what remains to be done, and what we expect from our partners around the globe.”

PM of Kazakhstan said that in 2017, our President Nursultan Nazarbayev announced the Third Wave of Modernization of Kazakhstan aimed at ensuring qualitative economic growth and determining the model of industrial and technological modernization in conditions of the Fourth Industrial Revolution. Currently, the works are carried out in all directions.

“At the end of 2017, economic growth was 4%. At the same time, the contribution of non-energy sectors provided almost 2/3 of growth. This means that the Kazakh economy is increasingly beginning to rely on non-energy sectors. Kazakhstan was ranked 36th in 2017 according to the international ranking Doing Business. Positions improved in 6 indicators. In total, about 50% of all foreign investments were directed into non-commodity sectors,” Prime Minister of Kazakh addressed the gathering.

He said, “Positive dynamics is maintained this year too. In just 5 months of 2018, agreements were reached to implement 69 new projects with major investors, including the United States, the United Arab Emirates, the United Kingdom, 10 TNCs from China, Turkey, the EU and other countries. The Kazakh-Chinese Industrial and Investment Cooperation Program is successfully implemented, which includes 51 projects to the tune of 27.7 billion USD. Combined, in 2018 54 projects will be completed for a total of 3.9 billion USD. A total of 63 projects worth 6.8 billion USD will also be launched.”

Sagintayev vowed the Kazakh Government will strengthen the coherence of national legislation with international economic and trade rules. Increase transparency, improve the protection of property rights, ensure the rule of law and encourage competition and limit monopoly based on the OECD standards. It was noted that Kazakhstan already has the status of an associated member of the OECD Investment Committee, which confirms that our country’s investment climate is in line with the Organization’s standards.

While addressing the participants Sagintayev said that “The Government carried out a decisive reform on deregulation and drastically reduced administrative pressure on business. Our President publicly signed the largest legislative package on improving the business climate, which includes more than 1000 amendments to 14 codes and 109 laws that came into effect. Control and supervisory functions have been reduced by 30%, and the number of claims — by 56% (17 thousand). Around 1,000 full-time equivalent inspectors have been revoked. New tax and customs regimes corresponding to the best international standards are in force. The new Code on Subsoil and Subsoil Use, based on the principle of “first-come-first-served”, has begun. The terms for granting subsoil use rights for solid minerals have been reduced from 18 months to 10 days. The procedures for planning projects in the sphere of public-private partnership are simplified. The procedure for attracting foreign labor has been simplified.”

In 2018-2020, privatization of the 9 largest assets of Sovereign Wealth Fund “Samruk-Kazyna,” including oil and gas, mining companies, a railway operator, an air carrier, etc., is planned. All the necessary decisions have been taken, now it’s up to investors. Wrapping up his remarks Prime Minister Sagintayev said the Kazakh Government is ready for an open dialogue on the whole range of issues and suggests not just investing, but building a new Kazakhstan, implementing the dream of prosperity in the broadest sense of the word – the prosperity of the country and its citizens, business and every investor.