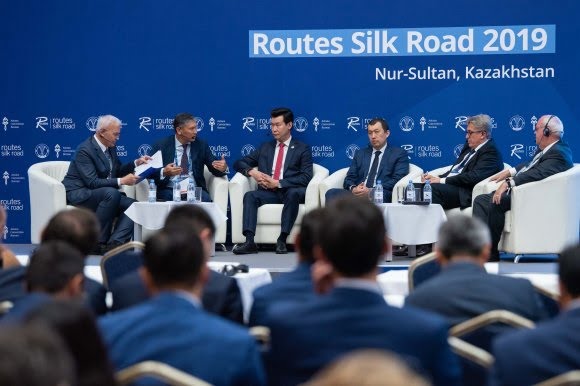 “For Nursultan Nazarbayev Airport, the international exhibition Routes Silk Road 2019 is a significant event. The conference will give us an excellent opportunity to declare ourselves as a high-level airport, present a new passenger terminal and discuss the development of new and existing destinations,” said Nursultan Nazarbayev International Airport Chief Executive Officer Radilbek Adimolda.

“We recently launched direct flights to Ulaanbaatar and Tokyo. We are planning to launch flights to New York, Singapore and Shanghai. We have worked throughout 98 international routes. I know that there are many heads of airlines that would like to work in Kazakhstan, and we are open to cooperation,” said Kazakh Vice Minister of Industry and Infrastructure Development Berik Kamaliyev.

HISTORY OF KAZAKHSTAN IN THE PERIOD OF THE GREAT SILK ROAD

For centuries the Great Kazakh steppe accepted caravans of the Silk Road in oases of its cities and settlements.

On the territory of Kazakhstan the Silk Road started from the borders of China. Merchants of Celestial Empire carried silk, weapons, medicines, rice, exotic goods such as tusks across Kazakh steppes to the West, to Europe. Steppe governors offered their services of safety provision for trade caravans; in exchange they demanded a share of the goods or cash. That was how quitrents or taxes and customs duties emerged.

The main line of the Silk Road on the territory of Kazakhstan lay across the country’s south; from the border with China trade caravans moved through the cities of Sayram, Yassy, Otrar, Taraz and further to Central Asia, Persia, to the Caucasus and from there to Europe.

The reason that all those cities emerged is that the merchants traveling across the enormous Kazakh steppes made stops which turned into caravanserais and those in turn grew into settlements which further became cities.