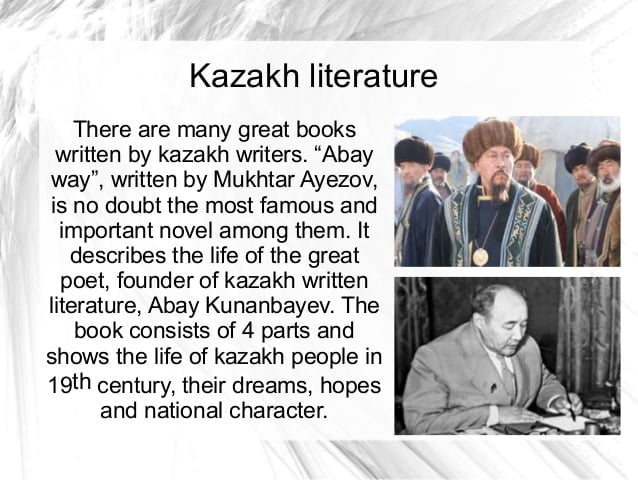 Primary sources of Kazakh literature are the epics “AlypEr Tonga”, “ShuBatir,” created in 11 centuries BC. Kazak literary tradition is rich in oral histories. These histories were memorized and recited by the akyn, the elder responsible for remembering the legends and histories, and by jyrau, lyric poets who traveled with the high-placed khans. Most of the legends concern the activities of a batir, or hero-warrior.

Written monuments of 4th and 5th centuries B.C. bring us the information about the development of crafts, arts, literature and oral folklore in Kazakhstan.

The best examples of literature are Orkhon writings. Such poems of Orkhon monuments as “Korkyt-nameh”, “Oguz-nameh” belong to this epoch common for all tribes. Their originals are still preserved on the large tombstones raised on the graves of famous beks and batyrs of Turk tribes – Kul-Tegin, Bilge-Kagan, Toniukuk who ruled the Turk tribes.

The history of Kazakh literature contains the names of legendary philosophers, scientists and poets: Abunasyr Al-Farabi, the founder of many sciences and arts (Maths, architecture and music); Makhmud Kashgari, the author of the invaluable work “Divan-Lugat-At-Turk” (Dictionary of Turk Dialects); Khodzha Akhmet Yassaui, the author of the unsurpassed collection of poems “Divan-I-Khikmet”; Yussuf Balasaguni, the prominent author of the temporal work of the nations in Central Asia and Kazakhstan “KutadguBilik”.

Kazakh oral poetry of the 19th century displays breadth and diversity unmatched by any other Turkic oral literature. The Kazakh literary concept of humanity is founded upon a complex interdependency of the natural and the human realms that is expressed through numerous metaphors dealing with animal life and the forces of nature.

The most important feature in traditional Kazakh culture and art is the perception of the universe through the eyes of a nomad. In this view – nomadism is not only way of life, but also a way of thinking about the world around him, about circles of life, about the interactions with Mother Nature and a never ending movement of human soul. According to this view the Human soul should always search for both perfect balance in real world and imaginary philosophically constructed world.

One of the outstanding authors in the literature of the beginning of the 20th century was Akhmet Baitursynov who devoted himself to pedagogical and literary activity translated Krylov’s fables.

Among the literary legends was AbaiKunanbaev was written with golden letters in the history of world literature. He was called “the greatest poet among the Kazakhs”. He shared his thoughts and sympathies in the prosaic writing “Kara soz”.

Mukhtar Auezov is another distinguished Kazakh writer, playwright and statesman. He has written the epic novel “Abai” which is considered to be his best work. This novel had a great influence on Kazakh literature and was translated into many languages of the world. For his creative activity this prominent Kazakh poet, educator and philosopher was awarded with State and Lenin Prizes.