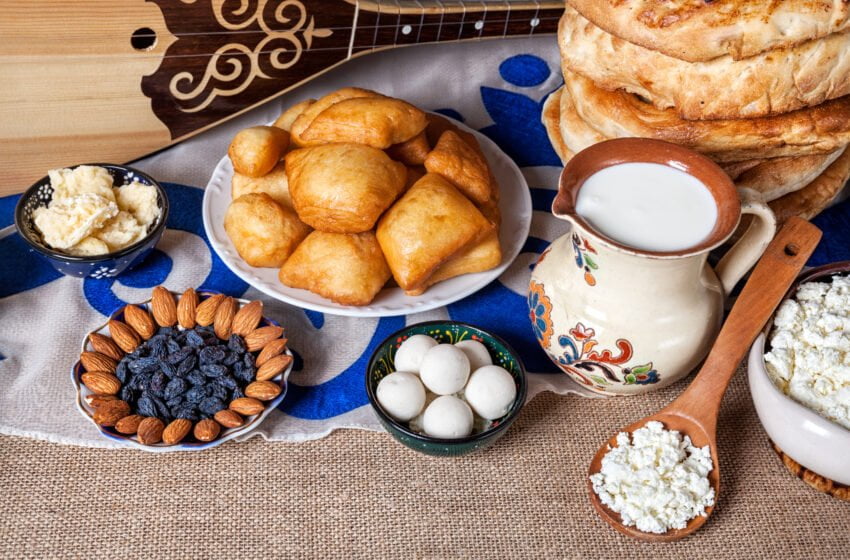 Hospitality has always been a main character trait of Kazakh people. Even if you have just a minute to pop in to a Kazakh house, an owner will still ask you to sit down and offer a fragrant tea with sweets. Respectful attitude to the guests contributed to the fact that traditional Kazakh feast took a shape of a ceremony, no inferior, in its philosophical and allegorical content, to world famous Chinese tea ceremony.

Kazakh food is based on the traditional nomad cuisine which is simple to prepare.  It is mostly meat “lamb and horse” glazed with some dairy and bread dough components. As the weather is particularly challenging, Kazakh food is traditionally very nutritious and contain a lot of fat to provide energy.  This means that Kazakh food can sometimes seem too oily or greasy to people who are not used to it.

The main meal of every dastarkhan and one of the most delicious for Kazakh people was Kazakh style cooked meat. Boiled meat was served in large uncut pieces. The host was cutting the meat himself and treat every guest: pelvic bones and shank for honorable old people, brisket for son-in-law or daughter-in-law, neck-bone for girls and so on.

The most honorable guest received particular method cooked head of the ram. The guest should part the head between people around the dastarkhan obeying to ancient ritual showing respectful attitude to guests, old people, and kids, near and far relations.

The delicious aromatic meat was eaten with thin boiled pieces of pastry. Excellent addition to this dish was rich flavored meat bouillon – sorpa, served in phials. Kumiss and tea were the last dishes of the meal.

The most popular Kazakh dish, it is the main dish of the national cuisine and is translated as “five fingers”, because the dish is eaten with hands.

Classic recipe of besbarmak is usually boiling a broth with several types of meat (horse meat, lamb, beef and camel meat) and rectangle-shaped pasta. Besbarmak’s main ingredients are: meat (lamb or horse meat), pasta (it is cut into small squares), as well as herbs (dill, parsley, and cilantro).

A traditional sausage made of fattened horsemeat, the fat is very rich and nourishing.  The thick coils of black meat look rather unappetizing in the meat chiller cabinets in the supermarket. Kazi is a popular part of any celebratory meal.

Kumiss, fermented mares’ milk, is a popular drink with many Kazakhstanis.

The fermentation process removes the lactose from the milk making it a good alternative to cows’ milk for the lactose intolerant. Kumiss is readily available from supermarkets.

Shubat is the camel’s milk equivalent to kumiss and is made in the same way.  Both Kumiss and Shubat are reputed to have wonderful health properties.  They are slightly fizzy and sour and are a somewhat acquired taste.

A cheese made from dehydrated sour cream.  It has to be softened before eating.  There is a very touching story about kurt.

Balls of dough, pre-fried in boiling oil. For optimum flavor they can be cooked in animal fat but most of the offerings found in supermarkets are cooked in vegetable oil.  Buarsak are usually round but sometimes look a little like fried won-tons.

Main ingredients in traditional Kazakh cuisine are meat, flour and milk products, though nowadays many other ingredients are common in the cuisine.

Kazakhs are believed to be among the top countries in tea consumption, almost every meal is followed by tea in Kazakh families.

Kazakh cuisine is usually not spicy.

There are many high calorie dishes in the traditional Kazakh cuisine.