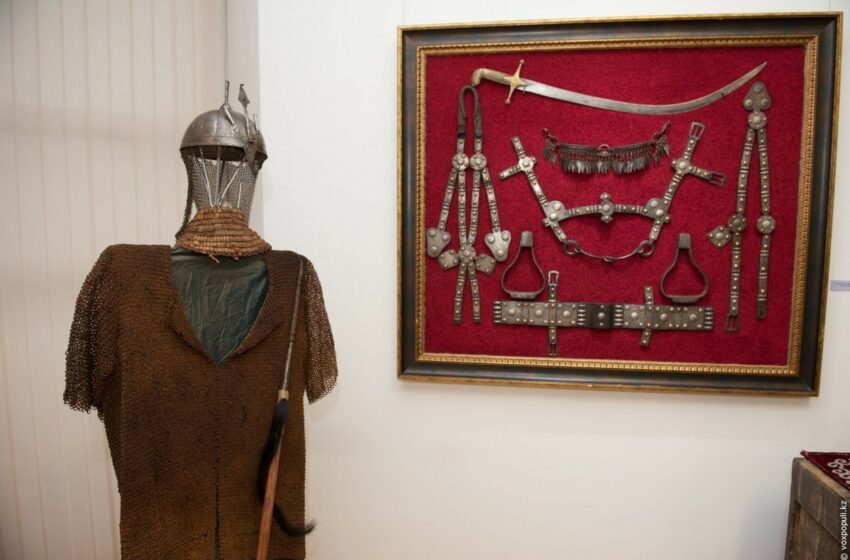 An exhibition of arts and crafts, objects of everyday life of Kazakh people of the 12th-19th centuries opened in the State Museum of Arts

CULTURE AND THE ARTS IN KAZAKHSTAN

Traditionally Kazakh and Kyrgyz cultures have been described as mixes of Mongol and Turkish culture and have influenced greatly by their nomadic and horse-mounted traditions. Since claiming independence the Central Asia nations have revived language and culture suppressed by the Soviet Union. Kazakh culture was hurt by Russification more than the cultures of other ethnic groups. As Kazakh nomads were forced to give up there nomadic ways and move to dreary cities and collective farms, they lost their traditions and identity. The Soviet Russification program was largely successful. Many Kazakhs speak Russian better than Kazakh.

The Kazakhs, men and women alike, are good horse riders. Young men like wrestling and a game in which horsemen compete for a sheep. There are horsemanship displays on the grasslands during festivals. The young people like to play a “girl-running-after-boy” game. The boys and girls ride their horses to an appointed place; the boys can “flirt with” the girls on the way. However, on the way back, the girls chase the boys and are entitled to whip them if they can as a way of “vengeance.” Such merry-making more often than not terminates with love and marriage.

Kazakh arts and crafts are also plentiful and colorful. Kazakh women are good at needle work and embroidery. They know how to make yurts, felt products, woolen products, traditional clothes and accessories. Some Kazakh men are skilled at making wooden crafts, silverware and bone artifacts and accessories are made of gold, silver, jade and semi-precious stones.

Before the Russian conquest, the Kazakhs had a well-articulated culture based on their nomadic pastoral economy. Although Islam was introduced to most of the Kazakhs in the seventeenth and eighteenth centuries, the religion was not fully assimilated until much later. As a result, it coexisted with earlier elements of shamanistic and animistic beliefs. Traditional Kazakh belief held that separate spirits inhabited and animated the earth, sky, water, and fire, as well as domestic animals. To this day, particularly honored guests in rural settings are treated to a feast of freshly killed lamb. Such guests are sometimes asked to bless the lamb and to ask its spirit for permission to partake of its flesh. Besides lamb, many other traditional foods retain symbolic value in Kazakh culture.

Because animal husbandry was central to the Kazakhs’ traditional lifestyle, most of their nomadic practices and customs relate in some way to livestock. Traditional curses and blessings invoked disease or fecundity among animals, and good manners required that a person ask first about the health of a man’s livestock when greeting him and only afterward inquire about the human aspects of his life.

The traditional Kazakh dwelling is the yurt, a tent consisting of a flexible framework of willow wood covered with varying thicknesses of felt. The open top permits smoke from the central hearth to escape; temperature and draft can be controlled by a flap that increases or decreases the size of the opening. A properly constructed yurt can be cooled in summer and warmed in winter, and it can be disassembled or set up in less than an hour. The interior of the yurt has ritual significance; the right side generally is reserved for men and the left for women.

The collapse of the Soviet system with which so many of the Kazakh cultural figures were identified left most of them in awkward positions. Even more damaging has been the total collapse of public interest in most forms of higher culture. Most of the books that Kazakhstanis buy are about business, astrology, or sex; the movies they see are nearly all American, Chinese, or Turkish adventure and action films; most concerts feature rock music, not infrequently accompanied by erotic dancing; and television provides a diet of old Soviet films and dubbed Mexican soap operas. Kazakhstan’s cultural elite is suffering the same decline affecting the elites of all the former Soviet republics. Thus, cultural norms are determined predominantly by Kazakhstan’s increasing access to global mass culture.

Art, Architecture and Crafts in Kazakhstan

Abylkhan Kasteyev (1904-73) is regarded as Kazakhstan’s greatest painters. The Museum of Fine Arts in Almaty is named after him. The new Kazakhstan capital of Astana showcases many trophy architecture pieces, including Norman Foster’s Palace of Peace and Harmony and the Khan Shatyr, or the “king’s tent,” a regal, translucent structure vaguely evocative of a yurt, which together cost over $12 billion.

Kazakh art is mainly in the form of carpets, wall hangings, clothing, and decorated yurt parts and everyday objects. Kazakh men are considered skilled woodworkers, leatherworkers, goldsmiths, silversmiths and metalworkers. Kazakh women are good at needle work and embroidery. They know how to make yurts, felt products, woolen products, traditional clothes and accessories for yurts. They have traditionally been widely praised for the intricate wall hangings they make for their yurts. Some Kazakh men are skilled at making wooden crafts, silverware and bone artifacts and accessories are made of gold, silver, jade and semi-precious stones.