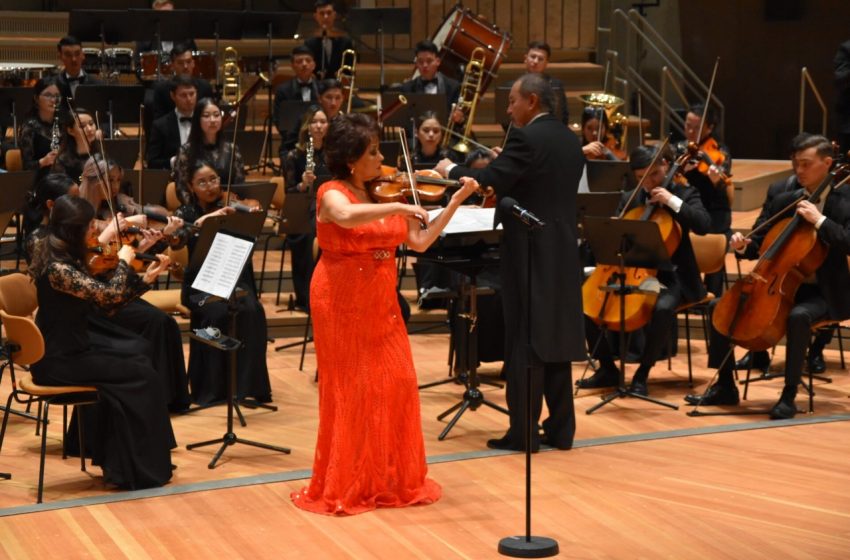 The music Kazakh connects past, present and future

From ancient times to the present day, the popular Kazakh legend came from the supernatural origin of music and singing, which says that the Divine song was flying high in the sky above the great Kazakh plains, then landed very low and people heard it, thus enjoying the rule of nature with talent and abilities Great musician Hence: “God has placed the talent in every Kazakh since his birth”, and day after day and year after year, as it was in ancient times, the music gathered between different ages and generations and connects the past, the present and the future.

It is no coincidence that the Kazakh lifestyle of the eighteenth and nineteenth centuries was not surprising and admirable to see the striking ability to consider the creation of fast music and poetic improvisation and a wide participation in music for the whole population of children to the elderly.

Children are able to play mud-puff machines at hand to the master or child and take exotic forms of animals, birds, fish and horses, painted in bright colours and covered with a shiny coat. In response to children’s songs, musical games and mother Lullaby, the children know the world around them and become full members of their social and cultural community.

He has given more independent life experience and technical knowledge by participating in youth entertainment and games with the obligatory participation of music and talk songs. “Early age” is enriched by love songs, a variety of songs and multi-party wedding rituals, and there are different types of music, including Zarami, which refers to the shock of the battle and Dabeella to hunt a beast or during a military campaign.

In this regard, the “maturity” that holds balance and experience is designed for the achievements of government and public affairs, “aging” and “wisdom” accompanied by music and poetry to guide young people, singing and philosophical reflections on the meaning of life And young people That Ever No Irreversible.

This was the musical life cycle of the Kazakh Bedouin, which is constantly repeated from one year to the next and from generation to generation to ensure the full performance of folk music traditions and remember the well-known verses of the “Great Abaya”:

Doors open for you to the world of Song

The song accompanies the Land of Ashes, moaning

Song-Eternal companion for the joys of the Earth

Until the early 20th century, the nation’s spiritual heritage evolved in an unwritten form and moved “from Mouth to mouth” from August to the son and from teacher to pupil from the past to the present, and the nomadic and semi-nomadic economy predetermined the popular machines, musical traditions and the inseparable life of Kazakh society From other forms of oral and poetic artistic creation.

The early stage of the development of music was fully subject to the needs of the old Bedouin community and was accompanied by major religious ceremonies and personalities, and lived in the popular memory of more than a hundred stories and each of them formed of thousands of verses that accompany Kopzev, a musical instrument in the form of an arch with two strings of Horse hair.

The daily heroic and lyrical epics of popular folk art such as “Kobelandi”, “Albaames”, “Artargin”, “Kempar”, “Keyes”, and others, legends, historical events, and the actual history of Kazakhstan, where ancient samples of instrumental music appeared later, continued The epic traditions and music of the instruments are associated in the popular mind and tradition with the name of the legendary saint “Corkett”.

One of the great works of Cork left to future generations is “the name of the sacred Camel”, “The Leopard”, “Ya Patriot” and others, some of which carry the voice of wildlife and a philosophical meditation on the meaning of existence, life and death.

Ancient examples of Daproa’s music include a legend that is settled with the names of animals and birds such as Ako, “Swan”, Fire, or “camel” and there is also a settlement for poor, unlucky creatures such as “Lame Girl” and “Gimp Wild Donkey” as well as settled to lament the drowned child and small animals such as “the Bear is bound Step “and” Lamentation “and” Orphan Girl “and others. They are all preserved remnants of ancient forms of religion and sects and continue to endure the living history of the thousands of years that have gone silently.

Only by the 19th century was the Kazakh music liberated from the religious and ritual chains and began to evolve as a self-sustaining artistic creation, this period was truly a spiritual renaissance of the nation that presented the great musical traditions of the people, and on the vast territory of Kazakhstan many local musicians appeared Performance schools and each region have been providing a kind of “specialization” in the development of specific traditions and thus the region of western Kazakhstan is a central area for the development of the art of Dabroa and central Kazakhstan is the focus of the professional paths and the Southwest region to preserve and develop the rich traditions of the epic, Itessa and art traditions Antagonism and improvisation. Many names such as Dina, Barzai, Musa, Estaya, Abraya, Madi, Abaya and others have entered history not only Kazakh but also the world musical culture, their works have been characterized by the style of the shining personality and the image and music and expressive means of pride and the classics of the Kazakh musical culture.

The creative activity of professional musicians in the 19th century and as a rule is not limited to performance or authorship but also includes all kinds of artistic forms such as poetry and rhetoric, polished acoustic technology, ingenious possession of a musical instrument, theatre elements and circus activities met in the plains Kazakhstan is an artist from the medieval musicians of Western Europe of the Bashallas, the itinerant poets and others.

In the 20th century, new forms and musical genres influenced the Kazakh musical culture, and European classical music emerged, such as opera, Symphony, ballet, Machine Concerto, chant, religious music, Oxistra and choir, and professional musicians began a new school based on Creative writing style, based on the organic composition of the national and European forms of the content of the 1930s and Walarbainat of the twentieth century, the classics of the Kazakh opera, and in the 1960s and seventies, reached the peak of one of the most difficult types of European instrument music The symphony has loved the National public Choir and the Kazakh Music Orchestra, especially the ethnographic orchestra which has gained great popularity.

At the current stage of development in Kazakhstan was formed a branching structure of musical culture where everyone can find something he loves, And beside Performance And composing By methods The European Go on Development Figures The traditional In Making The music With Music Rock And pop And jazz The music Of religious And folklore And traditions Of oral Of peoples That Live In Kazakhstan As Uighurs, Koreans, Germans, Dungan, Russians and Tatars. There are In Of the Republic Groups Technical Variety As The orchestra Sinfonietta And machinery The popular Kazakh And choir And band Dance Pdf And teams Jazz And machinery Brass And prepares Kazakhstan Home Several Of Artists Distinguished Of music The classical Of All Throughout World Like Tuljinova Waisimova Dananishev And Okbacerova And paved Stars Kazakh Outside Like Bisngaliva And sisters Nakepcovia.

Today, Kazakhstan is witnessing intense activity For school Musical Specialized For children And called “Almaty Conservatory “There are musical institutions such as the National Academy of Music in Astana, the opera and Ballet House, the Institute of Literature and Art and other musical, educational, cultural and scientific institutions, and each year Kazakhstan gathers talented young people at the” Days of New Music “festival and the International competition” voice Asia “and folk musicians at the International Festival of Traditional music.