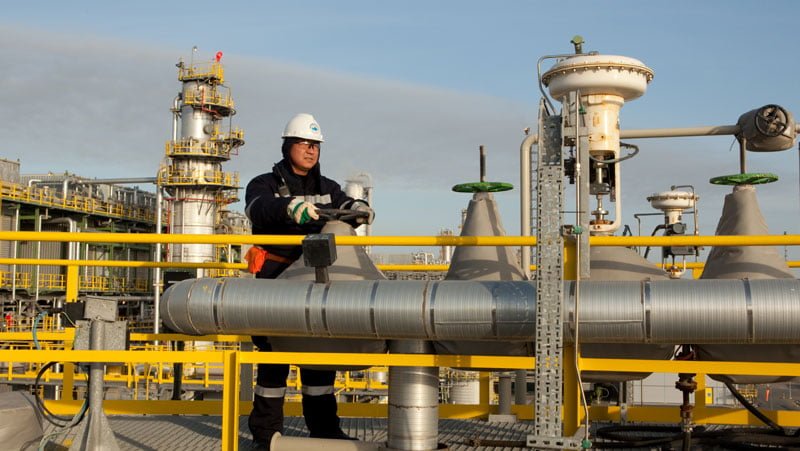 The industry in Kazakhstan is based on extracted minerals and other natural resources as well as the manufacture of some equipment such as tractors, machinery, agricultural equipment and arms industries.

In Kazakhstan, the most important industries were textiles and footwear, some metal and chemical industries, as well as oil-based industries, coal, iron ore, manganese, chromium, zinc, copper, titanium, bauxite, gold, silver, phosphate, sulphur and iron. And steel; the manufacture of tractors and other agricultural machinery, electric motors and the construction materials industry.

Other industries include metallurgical industries, and the state has tended to expand the production of metals, renovate some factories (with assistance provided by direct investments), and move towards the raw iron mines available in Sokolovsko-Saribai, develop metal production (stainless steel) and construct a production plant to produce only Stainless steel in Aktobe Some actions were taken in 1994 to develop the production of non-flammable substances fireproof materials.

However, it notes the decline in industrial production, which is often due to the lack of viability of enterprises in the absence of sufficient financial resources and the failure of buyers to pay the full cost.

As for the chemical, cutting and chemical industries, their production size exceeds the actual requirement. An insignificant amount is exported to the independent new Commonwealth republics and many other countries. Although the projects in this area suffer from shortages of raw materials and a shortfall in the supply of petroleum produced in Kazakhstan itself (due to poor transport structure) in 1994, the production of most types of cutting and chemical products decreased by a rate of between 55-60%  While the level of oil refining decreased by 20.3%. The timber and paper industries suffer from the inability of raw materials to meet the needs of the industry.  Cement production fell to 1973 rates and asbestos production levels decreased.

The state owns the equivalent of 2.5% of the world oil reserves.  Economic analysts believe that the planned expansion of oil production, coupled with the development of other areas, would enable the country to produce the equivalent of 3 million barrels per day by 2015, making Kazakhstan among the leading countries in this field.

The opening of the Black Sea pipeline Caspian Pipeline Consortium in the second half of 2001 to transport oil from the west of the Tenges field to the Black Sea has significantly increased export capacity and thus a noticeable increase in oil exports.

Kazakhstan’s oil exports in 2002 amounted to more than $5 billion, accounting for 43 percent of its total exports and 21 percent of the gross domestic product (GDP).

Inflation rates in 2000 amounted to 9.8% according to the National Bank of Kazakhstan estimates, and the national currency exchange rate (tang) of the US dollar was equivalent to 146 (ting dollars).