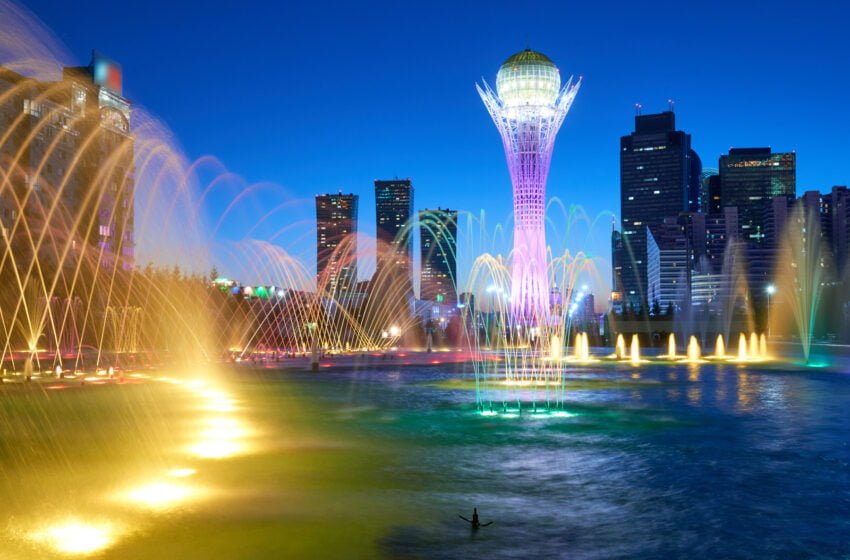 Kazakhstan… A tourist destination for holidays and adventures

It seems that the hands of change did not mess with the nature of this charming country, but still It preserves its own charm as a natural painting painted by God and no one has been allowed to change even a small detail in it, beaches adorned with greenery, and the depths of a rich and diverse seas that provide for those who wish to dive the world less and dense forests and rich in rare wildlife forms. This country is almost never denied its right because of its magnificence, which cannot be described in words and its distinctive charm, which is not abbreviated as a title.

Kazakhstan are not much different from Central Asian countries, However, it carries with it the advantages of distinguishing it from others, making it a unique place, Kazakhstan November Amazing nature, a country of lakes, mountains, forests, natural cisterns and large natural gardens.

It is a holiday destination and offers a corridor to many Central Asian countries, an important milestone on the Silk Road, with a unique cultural heritage and a rich heritage and ancient archaeological sites. Kazakhstan is part of the Silk Road and has common borders with Russia, Uzbekistan, Turkmenistan, Kyrgyzstan, China and the Caspian Sea.

Tourists arrive in the country in the months of May to mid-October. The first station is the capital of Astana, about 1318 km from the former capital of Almaty. In 1830, the Caucasian forces constructed military fortifications in the area. In 1862, Akmolinsk, at the crossroads of China, Russia and Central Asia, became a major trading hub in the region.

Kazakhstan, a Central Asian republic, is located at the crossroads of different cultures and civilizations, embracing more than 100 nationalities, the most prominent of which are Alkzgh and Russians, and the two main religions are Islam, Christianity and Judaism.

The population of this country is about 16 million (by the opening of the nun not by breaking it) 65% of them are Muslims, of whom the Kazakh form 55% and the remainder of different nationalities, with thousands of lakes and rivers 50,000 lakes and 85,000 river according to a government statistic, the Kazakh and residents eat horse meat and drink their dairy, as they drink Milk and camels (they are the last), and they have two-hump apple

Kazakhstan has three time-bound zones, three linked to one climate: there are mountain slopes where forests are concentrated, with no forests, sub-Saharan and desert. The Altai and weathering-shan mountain ranges, which comprise eastern and south-eastern borders, limit heat and humidity.

It is a country rich in natural resources, with sophisticated manufacturing and agriculture. The country’s main exports are oil, wheat and meat. In addition to being a major export, meat is part of a popular meal. The folk eaters are the Becharmak, which consists of lamb, horse meat and dough. A medicinal drink, the milk of horses, has medicinal properties where the pain of the chest and intestines is treated.

Kazakhstan is located in north Central Asia and partly in Eastern Europe (east of the Ural River), the country of Sabasp, formerly inhabited by Nomadic Knights, was annexed in stages to the Russian Empire and then the right of the Soviet Union, which has been independent since 1991. In the early days of the modern era, Turkish-Kazakh nomads, fishermen and cattle breeders whose social traditions are based on the tribal and clan tradition that have continued to this day, have been inhabited by these conflicting lands between the Chinese and Russian civilizations, which ended with alliances and military clashes to direct rule Of Moscow.

Almaty is one of the largest cities in Kazakhstan with a population of 1 million and a quarter of a million people, the former capital, founded in 1854 as a military fortress, and is a commercial, financial and cultural centre, boasting its restaurants, hotels and museums. Its national museum informs visitors about the history of Alkzgh, and there are several suites with ancient monuments. The Banflov square is worth a visit because it contains Russian churches built with wood, without nails, and is built into the 19th century. Almaty is the main tourist area, stretching from the city of Almaty to Lake Belkhach. It is known as the “Samergy” or the Seven rivers (Ziticci in the traditional language) in which the Silk Road passes. The region is one of the largest geographically diverse regions of Kazakhstan. Zetisi is renowned for its unique geographical nature in its attraction for centuries. There are many rivers that stem from its mountains, stretching in the form of pearl necklaces that end in beautiful oases. The Big River here is “to me,” which begins its journey from China in the west, forms the Kabachagi stream, and then pours into Lake Belkhach. One day it was part of the Silk Road. The Almaty area is a desert area, but it also has permanent snow and greenery. One of its attractions is the Medio, the world’s largest mountain water sports tourism complex in winter, with a 1,700-metre ski slope. Skiing here is not a stop for specialists but also for learners. It is a recreational complex that calculates all tastes, there are plenty of horses, beautiful hotels, and swimming pools in summer, as well as restaurants and cafes. It is also the place to meet people, because the Maata people enjoy these facilities which are not a stop for tourists.

Alma Ata is the largest city with a population (8.21% of the country’s population), Alma Ata, the old capital, and today is one of Kazakhstan’s most important commercial, economic and financial cities. Literally means “August apples”, and in the surrounding areas there is an unmatched genetic diversity in the wild circles, separating Alma Ata and the Chinese territory of the mountains created by Nur Sultan Nazarayev Astana after Kazakhstan’s independence to become the capital of the country since 1998, instead of the border city of Alma Ata. In the local language “Alma Ata” means the word “apples”, the origin of this label is due to the Apple farms that surround the city and cover its mountains in green and red, and located at a height of 1,000 meters above sea level, which gives it a moderate weather-as described by its visitors-although there are no sunny beaches or ash Palm groves are not a tourist flock, and the mild weather and the beauty of rural nature make Alma Ata an ideal spot for comfort and relaxation.

Alma Ata is one of the most attractive cities for those looking for some adventure (mountain climbing) and relaxation and whatever the purpose of your visit, you will always enjoy the scent of the distinctive greenery surrounding the place, and due to its geographical location, the city knows only the summer and winter, but despite This gives you a chance to sunbathe in winter or ice skating for eight months a year, and Alma Ata is characterized by magic, natural beauty and wild tranquility that holds you away from the hustle and bustle of life in other cities.

Alma Ata is not devoid of ancient civilization, as it lies in the middle of the great Silk Road, a network of roads that have travelled several continents and connects the island of Java in South-east Asia to China and then to Somalia in Africa to the end of Europe through Egypt.

The other attractive place is the dam in the Malaya Ka Valley, which has protected the city from the silt that the flood has brought in more than once. Today, tourists climb up to 830-degree terraces that reach the bank and give them a comprehensive and spectacular view of the skyline of the sky. Some stay there at night, while others accept a cursory vision. To the east of Almaty, Issik lies at the edge of the mountains. This town is small, built and has many gardens. There is 15 km from the centre located Lake Issyk. It is one of the Jewels of Tyne Shan, the preferred place of rest. The country is famous for its colorful mountain rocks. Tamgali Valley, the most famous in the region, is located in the area of the Anrakai mountains. A lot of colorful rocks are located in the entrance of the valley.

416 Frozen Rivers There are 416 glaciers in this region, covering an area of 510 square kilometres (197 square miles).  Kazakhstan or Kazakstan is a large country, with an area of approximately 3 million kili (km) (by the way there are many kinds after kilo.. Km.. Kilo grams.. Kilo Hill any kilohertz right-a-dial-money-radios).  Another attractive landmark near Almaty is the water cistern at Cap Chagai, the largest in Kazakhstan, with an area of 100 km in 25 km. It is the favourite place to swim in summer and to enjoy the sun. The northern side is where houses and rest places are. The… 1439 km is the favourite place for adventure tourism, especially small boats and fishing. The sands that are sung are also another landmark in Kazakhstan. It is located 182 km south-east of Almaty on the right bank of the river Ali. The friction that causes the movement of dry sand atoms creates electrical charges in the atoms and makes them fluctuate. The sound can be heard thousands of kilometres away.